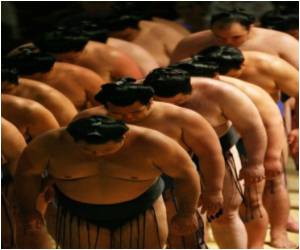 Sumo wrestlers in Japan have been given Apple's IPad for better communication, after struggling for years with tiny mobile phone keypads.

With the sport's reputation tarnished by recent scandals, the Japan Sumo Association is distributing about 60 iPads among all the 51 training stables and top association officials from this week to help improve communication.


And it's a giant leap for a super-sized sport that has until now relied on old-school modes of telephone and fax machines.


"It seems rather easy to use," association chief Hanaregoma said following a brief training session on the popular tablet gadget. "Sending emails was very easy."

A digital novice himself, the 62-year-old former wrestler admitted that while he can read incoming text messages on his mobile phone, he doesn't know how to write replies and does not usually use a computer.

But "time flies if you play with this", he said of the Apple gadget.

The iPad was chosen because the sumo association believed the device was big enough to cater to wrestler's fat fingers, unlike the miniscule keys on cellphones, media reports said.

Sumo officials decided to go digital and buy iPads as the ancient sport attempts to mend its ways after scandals over wrestlers' ties with gangsters and illegal gambling, match-fixing and brutal hazing of apprentices.

The sport's authorities faced loud public criticism for their clumsy efforts to investigate the scandals, in part due to insufficient sharing of information among sumo leaders.

With a reliance on faxes and phone calls, the sumo association has occasionally failed to distribute urgent messages to its officers and stable masters.

"If we place this (iPad) in all the stables, we should be able to contact them anytime," the association's spokesman Nishonoseki has said.