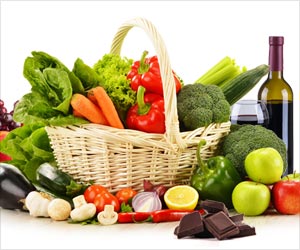 Antioxidant flavonol was linked to reduced risk of Alzheimer's dementia, stated study published in the online issue of Neurology®, the medical journal of the American Academy of Neurology. Flavonols are a type of flavonoid, a group of phytochemicals found in plant pigments known for its beneficial effects on health.

"More research is needed to confirm these results, but these are promising findings," said study author Thomas M. Holland, MD, of Rush University in Chicago. "Eating more fruits and vegetables and drinking more tea could be a fairly inexpensive and easy way for people to help stave off Alzheimer's dementia. With the elderly population increasing worldwide, any decrease in the number of people with this devastating disease, or even delaying it for a few years, could have an enormous benefit on public health."

The study involved 921 people with an average age of 81 who did not have Alzheimer's dementia. The people filled out a questionnaire each year on how often they ate certain foods. They were also asked about other factors, such as their level of education, how much time they spent doing physical activities and how much time they spent doing mentally engaging activities such as reading and playing games.


The people were tested yearly to see if they had developed Alzheimer's dementia. They were followed for an average of six years. The researchers used various tests to determine that 220 people developed Alzheimer's dementia during the study.
Advertisement
The people were divided into five groups based on how much flavonol they had in their diet. The average amount of flavonol intake in US adults is about 16 to 20 milligrams per day. In the study, the lowest group had intake of about 5.3 mg per day and the highest group consumed an average of 15.3 mg per day.

The results were the same after researchers adjusted for other factors that could affect the risk of Alzheimer's dementia, such as, diabetes, previous heart attack, stroke and high blood pressure.

The study also broke the flavonols down into four types: isorhamnetin, kaempferol, myricetin and quercetin. The top food contributors for each category were: pears, olive oil, wine and tomato sauce for isorhamnetin; kale, beans, tea, spinach and broccoli for kaempferol; tea, wine, kale, oranges and tomatoes for myricetin; and tomatoes, kale, apples and tea for quercetin.

Holland noted that the study shows an association between dietary flavonols and Alzheimer's risk but does not prove that flavonols directly cause a reduction in disease risk.

Other limitations of the study are that the food frequency questionnaire, although valid, was self-reported, so people may not accurately remember what they eat, and the majority of participants were white people, so the results may not reflect the general population.

More News on:
Alzheimers Disease Food Additives Herbs and Antioxidants Mint It All! Quiz on Antioxidants Foods that Gives You Sparkling Eyes Berries for a Healthy and Beautiful You Anti-Aging Treatment with Vinotherapy or Wine Facials The Fruit in News  Guava Bael - The Ultimate Medicinal Summer Fruit

Antioxidant Food Chart
Know the antioxidant value in foods and plan your daily menu with antioxidant rich foods to stay ......

Quiz on Antioxidants
Antioxidants are substances that guard your cells against free radicals that are produced during ......

Anti-Aging Treatment with Vinotherapy or Wine Facials
Experience the bliss of vinotherapy - the power of grapes for a kissable ......

Mint It All!
A popular garden herb, mint has earned worldwide fame both in the kitchen as well as health. A tasty...