Antidepressant Use may Boost Hypertension in Pregnant Women: Study 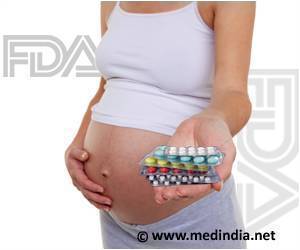 Use of serotonin re-uptake inhibitor (SSRI) antidepressants may cause pregnancy hypertension, warns study.

But a causal link has not been established and researchers behind the study said that pregnant women should not stop taking their prescribed medication; instead they should seek a consultation with their doctor if they are concerned.

Eclampsia is convulsions during pregnancy that are not related to a pre-existing brain condition.
Advertisement

Pregnancy hypertension is sometimes linked with pre-eclampsia, a serious condition that can harm pregnant women and their unborn babies.

Blood pressure is the pressure of the blood flowing through your blood vessels against the vessel walls. Just by entering you age, you can get the accurate range of blood pressure value.
Advertisement
"These results are an early indicator of risk attributable to antidepressant drug treatment above that which may be attributed to depression or anxiety disorders in the absence of drug treatment," said senior researcher, Dr Anick Berard who is Director of the research unit of medications and pregnancy at CHU Ste-Justine's Research Center, and professor at the Faculty of Pharmacy at the University of Montreal, Quebec, Canada.

The study drew data from the Quebec Pregnancy Registry and compared 1,216 women who had been diagnosed with pregnancy-induced hypertension with or without pre-eclampsia and with no history of hypertension before pregnancy, with 12,160 matched controls.

The message, however, is not as simple as telling pregnant women to stop taking antidepressants, because once a woman is using them, discontinuation during pregnancy is associated with an increased risk of depressive relapses and post-partum depression.

"Individual decisions have to be made one woman at a time, and risks and benefits have to be evaluated carefully in consultation with a doctor; there is no 'risk zero,'" Dr Berard said.

"This research adds another piece of evidence and shows the importance of fully assessing the risks and the benefits of antidepressant use during pregnancy for the mother and child," the researcher added.

The research has just been published in the British Journal of Clinical Pharmacology.

If you are trying to find out whether you have conceived this time around, you can ask other people, worry in silence or take this quiz on early signs and symptoms of pregnancy.
Advertisement
<< Drug Target for Stimulating Recovery from Stroke Identified
Scientists Identify Structure of Saliva Receptor >>

Stress and the Gender Divide
News Archive
News Resource
Advertisement
News Category
Why Twin Mothers are More Fertile? New Guidelines to Treat Depression in Pregnant Women New Evidence on the Use of Contraception for Women Worldwide Do You Get Pregnant While You are in COVID-19 Infection? Is Telehealth Effective in Treating Menopause Symptoms?
More News
Sign up for Wellness Consult a Doctor Sign up for Selfcare