Antibodies That Protect Against Large Variety of Flu Viruses Described 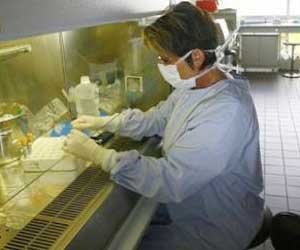 Three novel antibodies that provide protection against influenza B virus strains have been described by researchers. The same team had previously reported finding broadly neutralizing antibodies against Influenza A strains.

The isolation of the new broadly neutralizing antibodies, which was reported the journal Science's advance online edition, Science Express, on August 9, paves the way for researchers to develop a universal antibody-based flu therapy for use in severe infections or to protect hospital staff during an outbreak. Importantly, these antibodies may provide key clues to the design of an active universal flu vaccinedesigned to protect long-term against flu viruses, not just against the current season's strains.

"To develop a truly universal flu vaccine or therapy, one needs to be able to provide protection against influenza A and influenza B viruses, and with this report we now have broadly neutralizing antibodies against both," said Ian A. Wilson, the Hansen Professor of Structural Biology at Scripps Research, who was senior investigator for the new study with Crucell's Jaap Goudsmit and Robert Friesen.


One of the newly discovered antibodies will be of special interest to flu researchers, because it appears to protect against essentially all influenza B and influenza A strains. "It's the only one in the world that we know of that has been found to do this," said Wilson.

Detected new strain of influenza virus in harbor seals may represent a risk to wildlife and human health, state authors of a study featured on July 31 in mBio®.
Advertisement
Looking for the Missing Pieces

Influenza B viruses are considered less dangerous than Influenza A viruses, and have been less intensively studied because they have less capacity to mutate into deadly pandemic strains. However, influenza B viruses account for a significant part of the annual flu illness burden in humans.

To find broadly protective antibodies against Influenza B, the team at Crucell generated a large collection of flu antibodies from the immune cells of volunteers who had been given a seasonal flu vaccine. The researchers then screened this collection for antibodies that could bind to a wide variety of influenza B strains.

Three of the antibodies they found in this mannerCR8033, CR8071, and CR9114protected mice against normally lethal doses of the two major influenza B strains. CR9114 also protected mice against influenza A viruses, including the H1N1 subtype that killed about 17,000 people in a 2009 pandemic. The fact that these antibodies protected against a variety of flu strains suggested they mark functionally important sites, or "epitopes," on the virus that are relatively unchanging (conserved) from one flu strain to the next.

Wilson's team at Scripps Research characterized the newly discovered antibodies' binding sites on influenza viruses using electron microscopy and X-ray crystallography techniques. They found that CR8033 binds to a highly conserved epitopea functionally important siteon the "head" of the hemagglutinin protein, a structure that studs the outer coat of flu viruses and allows the viruses to stick to vulnerable cells. CR8071 binds to the base of the hemagglutinin head. Most antibodies that bind to the hemagglutinin head and neutralize influenza do so by blocking the virus's attachment to host cells.

Innate and adaptive immune responses are important to the control of influenza virus infection, reveals study published on PLoS Computational Biology.
Advertisement
<< List of Olympians Who Cry Most After Winning
Marijuana Use Causes Brain Damage >>