Antibiotic Resistant Bacteria can be Made Sensitive Again 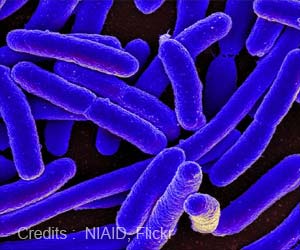 Increasing the distance between the two membranes of the periplasm can block the signal and disrupt the protective response of bacteria to antibiotics, reveals a recent study.

Bacteria must sense and respond to changes in their environment to survive, and their exterior membranes are their first line of defense.

Advertisement
‘Antibiotics can be more effective when the distance between the two membranes of the periplasm is increased making antibiotic resistant bacteria sensitive again.’

Exciting new research reveals a previously unappreciated aspect of this defense, which could be exploited to render antibiotic-resistant bacteria beatable.


The research, published in the open access journal PLOS Biology by Jean-François Collet at UCLouvain's de Duve Institute in Belgium and colleagues from the University of Utah and Imperial College London, potentially opens the door to promising new treatments.
Advertisement
Bacteria appeared on earth more than a billion years before humans, and for nearly 350 years people have been exploring them to understand how they work and, above all, to try to fight those that cause them harm.

More and more bacteria are becoming resistant to available antibiotics as they acquire new defence mechanisms.

So-called "gram-negative" bacteria, such as E. coli (and the bacteria that cause bubonic plague and gonorrhea), have two outer membranes that are separated by a region known as the periplasmic space. Lead author Jean-François Collet likes to compare these bacteria to a castle with a double protective enclosure, with the periplasm as the outer bailey.

Bacteria monitor for any kind of perturbations to their outer membrane, such as the presence of a membrane-targeting antibiotic, and send a relay signal to the cytoplasm to mount an appropriate repair response. This response can make the bacteria resistant to the effects of the antibiotic.

While studying this stress-signaling pathway, the scientists found that by increasing the distance between the two membranes (the size of the periplasm) they could block the signal and thus the protective response.

The increased distance prevented the sentinels at the outer membrane from being able to alert the bacterium that it was in danger and that it needed to activate its defenses.

The researchers then discovered that they could compensate for the increased distance between the membranes by increasing the length of the stress-signaling proteins. This demonstrates that the distance between the two membranes is a critical aspect of the bacterial stress response, and one that could be exploited by novel antibiotics.

Gram-negative bacteria are exceptionally difficult to target with antibiotics because their double membranes are so hard to penetrate.

However, using these new insights, researchers can now look for compounds that increase the distance between the membranes and disrupt the protective response to antibiotics.

New Test can identify Antibiotic Resistant Bacteria in Thirty Minutes
New test can reveal antibiotic resistant bacteria in half an hour, equipping doctors to fight off .....

Sclerosis Drugs can Keep Antibiotic Resistant Bacteria at Bay
multiple sclerosis drugs such as glatiramer acetate can now be used to fight against some multi ......

Tests Help In Identification Of Antibiotic Resistant Bacteria
With excellent sensitivity and specificity, two new tests for the diagnosis of resistance to ......