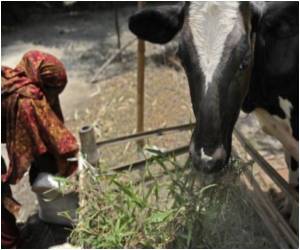 Health officials are struggling to contain a major outbreak of anthrax in northern Bangladesh, with at least 52 new infections registered in the past week, the health ministry said Monday.

At least 162 people have been infected with the bacteria in nine separate outbreaks in less than a year, but no one has died so far, Mahmudur Rahman, a health ministry director, told AFP.

Most of the cases have been in the rural cattle-rearing region of northern Bangladesh.


"In the latest outbreak in the northern town of Shajadpur, 52 people became infected in the last week," Rahman said.

Anthrax is a potentially lethal bacterium that exists naturally in the soil and commonly infects livestock which ingest or inhale its spores while grazing.
Advertisement
It can be transmitted to humans who handle or eat infected animals.

There is a vaccine to prevent infections in cows, but the Bangladeshi livestock authorities "do not have adequate supplies" to immunise all the country's cattle, Rahman said.

"It's an emerging disease in Bangladesh -- one that has caught the farmers and the livestock department off guard," he added.