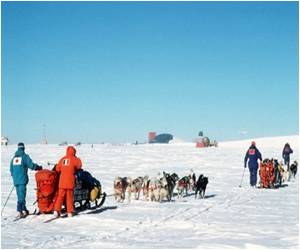 The group paid a small fortune -- $3,000 per head -- for a quick five-hour visit to the frozen continent, arriving by plane.

Collapsing Ice Shelves of Antarctica to Disappear in Next Two Centuries

A number of floating ice shelves in Antarctica are at risk of disappearing entirely in the next two centuries due to global warming, a new report has said.
Advertisement

"Coming to Antarctica was a dream for me and my wife," American John Reiss, 81, said as he stood beside his wife Sharon, 73.


"We signed up a couple years ago, but we couldn't get on it, so we went on a waiting list. This year we signed an year in advance and we made it."

Researchers unexpectedly stumbled upon a new species of sea anemones that were burrowed into the ice, while using a camera-equipped robot to study the floor of Antarctica's Ross Ice Shelf
Advertisement
The couple boarded a cruise ship in Florida, where they live, to head to Punta Arenas in the south of Chile, where they caught a two-hour flight to Antarctica.

The tourists visited the island of King George, in the South Shetlands archipelago and the neighboring Russian station of Bellingshausen with its out-of-place Orthodox church.

They also saw the small Chilean hamlet of Villa Las Estrellas home to just 64 people and colonies of penguins.

Another option is to tour Half Moon Island, a habitat of seals and penguins that is home to the Argentine base of Teniente Camara.

There they can sip a hot cup of coffee, send a postcard and get their passport stamped with a picture of a krill, a kind of small shrimp that is the symbol of the base.

"It was a fantastic experience. The first thing that makes this trip special is being able to visit such a well-preserved, untouched continent," said Canadian Maureen Malone, 69.

Tourism is one of the few economic activities allowed by the Treaty of the Antarctic and the Madrid Protocol, which bans mineral extraction on the white continent.

The Antarctic draws more than 30,000 tourists per year, from November to March, when there is no problem landing on the frozen sea.

Most arrive on ships that cross Drake Passage in the Southern Ocean, which has some of the world's worst weather, setting off from Ushuaia in southern Argentina and from Punta Arenas.

"Ninety percent of the tourists from around the world who come to Antarctica leave from Ushuaia. The cruises last an average of 11 days. The cheapest ones cost $5,000. The most expensive, which last 15 days and go to the South Pole, cost $12,000," Brazilian Gunnar Hagelberg, owner of Antarctica Expeditions, told AFP.

More than 35,350 people will have visited Antarctica by the end of this year -- 1,000 more than last season and 8,000 more than in 2011-2012, according to the International Association of Antarctic Tour Operators.

"We carry from 120 to 130 people per season. We have seen a 15 to 20 percent increase in the number of tourists who want to see the continent," said Nicolas Paulsen, deputy commercial director of the Chilean airline Dap, which offers logistical and tourist flights.

Paulsen said tourism in Antarctica is rising three percent more per year than tourism to Chile, which is up seven percent. Most visitors come from the United States, Australia, China, Russia and, more and more, from Brazil.

"Antarctica is vital for us. It affects the climate, the sea currents. Tourism is important because the more people get to know it, the more they will want to protect it," said Paulsen.

Geologic evidence that casts doubt on one of the conventional explanations for how Antarctica's ice sheet began forming was found by a team of scientists from the US and UK.
Advertisement
Advertisement

Dream theories and meaning of dreams abound while our dreams continue to intrigue us, puzzle us, even ...