Another Cholera Outbreak in China 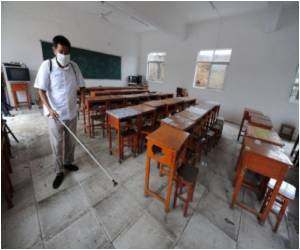 In the second outbreak of cholera, the fatal disease has attacked nearly 20 middle school students in eastern China, reports the government.

A total of 19 cases have been detected at a school in Huaian city in Jiangsu province, prompting health authorities to issue a warning for the region and urge increased disease monitoring, the Jiangsu government said Thursday.

The students began falling ill on September 2, displaying common symptoms including fever, abdominal pain and serious diarrhoea and vomiting, it said in a statement.


The city is on the border with Anhui province, where authorities covered up a cholera outbreak for 12 days last month out of fears that publicising it would shock the local population, state media said earlier this week.

An enzyme in cholera-causing bacteria uses a previously unknown mechanism in providing the bacteria with energy, scientists have found.
Advertisement
The Anhui health department acknowledged Tuesday that at least 38 people in the province had been sickened with cholera since August 16, with all patients already out of hospital and no new cases discovered this month.

Cholera can be fatal if not treated quickly and normally breaks out in impoverished regions with poor sanitation. Reports of cholera in China have become increasingly rare in recent years.

It was not immediately clear if the strain of cholera found in Anhui was the same as the one detected in Huaian.

No fatalities have been reported in either outbreak.

Waterborne diseases are communicable diseases caused by diseases causing microorganisms in contaminated water. It is more prevalent during floods and in tsunami affected areas.
Advertisement
<< Health-giving Herb Ginseng Honored by South Koreans
Bullying in School Related With Weight can Affect the Child... >>