Every five years a temple in southern Nepal plays host to an extraordinary religious festival in which hundreds of thousands of animals are sacrificed to the Hindu goddess of power Gadhimai.

For two days, the tiny village of Bariyapur near Nepal's border with India flows with blood as thousands of Hindu devotees flock to the temple to take part in what organisers believe is the world's biggest ritual slaughter.

China has finally unveiled laws to prevent cruelty to pet animals. These rules were framed with the help of the Royal Society for the Prevention of Cruelty to Animals (RSPCA).
Advertisement 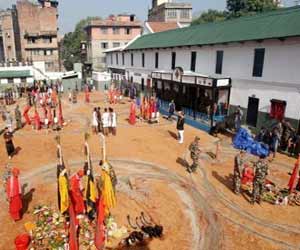 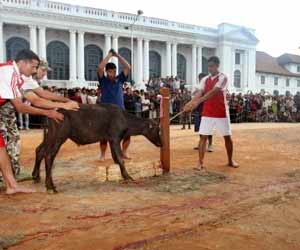 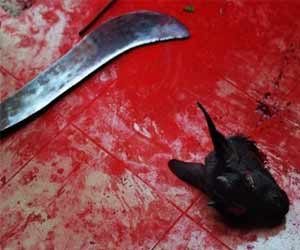 Many travel from neighbouring India for the festival, which has been running uninterrupted for around three centuries and is due to take place on November 24 and 25.


But this year, a group of animal rights activists is campaigning to stop what it says is senseless cruelty to innocent creatures -- pitting themselves against Hindu devotees in this deeply religious nation.

PETA of Chandigarh Accuses KFC Against Cruelty to Chickens

People for the Ethical Treatment of Animals (PETA) activists staged a demonstration in front of American fast food outlet Kentucky Fried Chicken (KFC) here against cruelty towards chicken.
Advertisement
"We launched our campaign to put a stop to the gruesome killing of animals in the name of God," said Pramada Shah, director of campaign group Animal Nepal which has launched an online petition demanding the festival be cancelled.

"Even in the 21st century, innocent animals are facing cruel treatment due to people's superstition."

The campaign received a local boost when it won the support of Ram Bahadur Bomjam, a young Nepalese man believed by followers to be a reincarnation of Buddha after supporters said he could survive without water, food or sleep.

Bomjam, dubbed "Buddha Boy" by Nepalese media, has spent the past year meditating in the jungle near Bariyapur, but last week broke his silence to condemn the festival.

"Human beings have turned brutal by offering animal sacrifices to the goddess. This practice must be stopped now," he reportedly told local media.

Bomjam's supporters have organised their own campaign to put a stop to the festival, distributing pamphlets in the area and in Indian towns on the border urging people not to take part.

One reason for the event's huge popularity is its proximity to India, where some states have now banned sacrificial slaughter.

"In India today there is greater awareness about animal sacrifice and suffering, so people and rights activists are against it," said N.G. Jayasimha, campaign manager for People for the Ethical Treatment of Animals in India.

"Some states have banned animal slaughter even for religious purposes -- including Karnataka, Gujarat and Madhya Pradesh. So all these factors contribute to the numbers going to Nepal."

But animal rights campaigners face an uphill struggle in Nepal, where Hindus make up 80 percent of the population and where ritual sacrifice is a part of everyday life.

Local authorities said they would increase security surrounding the festival, which begins with the sacrifice of two wild rats, a rooster, a pig, a goat and a lamb before the temple's statue of Gadhimai.

Devotees can then bring their animals into the temple for ritual purification before taking them into the grounds where they will have their throats slit. The meat is distributed and eaten.

Nepal's government has already pledged 4.5 million rupees (60,000 dollars) in funding for the festival and authorities say they have no power to stop it going ahead.

The temple's head priest, Mangal Chaudhary Tharu, told AFP 800,000 people attended the festival in 2004, when about 400,000 sacrifices were made, and he said he expected more people to come this year.

"Nepal's security situation has improved and we are expecting a larger turnout this year," said Tharu, the fourth generation of his family to serve as a priest for the festival, whose origins have never been documented.

"We are not forcing devotees to sacrifice animals. It is an age-old practice and it must continue.

"The festival will lose its charm and become meaningless if we break with tradition."

A YouTube video clip showing pigs being culled in Egypt as part of swine flu measures has caused outrage at the apparent barbarity of the method of slaughtering the animals.
Advertisement
<< Chennai Corporates Take to Taichi to Beat Stress
Lahore University to Ban Kissing >>