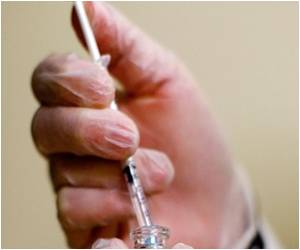 The researchers have found that they can burn off excess fat in specific areas of the body by injecting tiny capsules filled with a modified type of heat-producing cell commonly found in animals and babies.

The cells release "signals" that alter the surrounding fat tissue so surplus calories are used up by producing body heat rather than being stored as fat.


Tests in animals have shown that injecting the capsules caused obese mice to lose up to 10 percent of their body weight even when being fed a high calorie diet.

Slide show which explains obesity causes and tips on how to lose weight. Exercising before breakfast is most effective for weight loss.
Advertisement
The researchers are now planning to begin treating obese dogs later this year. If successful and found to be safe, it is hoped that the treatment could be available for use in humans in around six years.

Researchers believe the capsules, which are around three times the width of a human hair, could be injected into specific fat deposits like the thighs, buttocks, arms or under the chin to reduce the amount of fat stored there.

It could solve the problem faced by many dieters who find it difficult to shed weight in some stubborn areas no matter how much weight they lose or how much they exercise.

"We found the capsules completely remodelled the fat they were put into," the Telegraph quoted Dr Ouliana Ziouzenkova, lead researcher from Ohio State University, as saying.

"Our goal was to achieve a way of targeting deleterious visceral fat that increases the risk for diseases like type 2 diabetes and cardiovascular disease.

"We have to prove that this is safe and effective in humans, but we could think about using it for body sculpturing. So if you wanted to remove a small amount of fat under your face like a double chin, or in their arms or legs, you could target these with a single injection.

"We have a grant now to carry out some work with obese dogs as it could also be of great benefit for veterinary purposes as there is a growing problem with obese pets," Ziouzenkova said.

Dr Ziouzenkova and her colleagues used fatlike cells from mice that had been genetically modified to burn off excess energy as body temperature.

They found that by encasing these cells inside plastic-like microcapsules, they could be transplanted without being destroyed by the recipients immune system.

The cells are thought to cause this change by releasing signals known as thermogenic factors through pores in the capsules into the surrounding unhealthy body fat. These then changed the fat into heat producing cells known as thermocytes.

Thermocytes, sometimes called brown fat, are abundant in many small animals and in human babies where they help maintain body temperature by burning off energy as heat rather than storing it like normal fat. Humans, however, lose these cells as they grow older.

Dr Ziouzenkova believes that by transplanting cells from animals such as mice into adult humans, known as xenotransplantation, it may be possible to increase the number of thermocytes in adults and so help them reduce the amount of body fat they carry.

"Microcapsules are cost effective as it means the same cells can be used for different patients," she said.

"The capsules are like a plastic bag that have pores in them so the immune system cannot enter but the thermogenic factors can escape.

"The cells essentially become invisible to the immune system and so can start to change the fat around them.

"Xenotransplantation will reduce the cost of treatment and cells could be stored to specifically address patients needs. In our preliminary studies in animals, we observed only minor local inflammation caused by degraded capsules with a xenotransplant.

"If implanted cells from animals do not work in humans, however, we aim to modify human cells so they have the same effect," she added.

The study has been published in the journal Biomaterials.

German drugs giant Bayer said Monday it had launched tests into an injectable drug to combat the fat deposits that lead to the dreaded double chin.
Advertisement
<< Patient Navigation Leads to Faster Diagnosis for Breast Can...
Anna Hazare to Undergo Eye Surgery >>

Excess Weight Before and During Pregnancy can Result in Larger Babies: Research

Researchers including one of Indian origin say that women with excess weight, both before pregnancy and gained during pregnancy, may be at risk of having larger than average babies.
Advertisement
News A-Z
A B C D E F G H I J K L M N O P Q R S T U V W X Y Z
What's New on Medindia