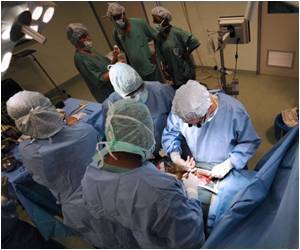 Chronic cerebrospinal venous insufficiency (CCSVI) is a condition characterized as a blockage in the veins that drain blood from the brain and spinal cord and returns it to the heart.

Researchers investigated the connection between CCSVI and multiple sclerosis MS.


MS is typically treated with disease-modifying drugs, which modulate or suppress the immune response believed to be central in the progression of the disease.

Coronary balloon angioplasty is an interventional procedure wherein blood flow is restored in a blocked blood artery supplying the heart.
Advertisement
"Traditional theories surrounding treatment for multiple sclerosis in large part focus on autoimmune causes for brain pathology and neurologic symptoms. Based on this, treatment has been predominantly medications by mouth or injection," stated Kenneth Mandato, M.D., an interventional radiologist at Albany Medical Center in Albany, N.Y.

"Interventional radiologists, pioneers in the field of minimally invasive therapies, have been performing an endovascular therapy called angioplasty for years, to treat blocked or narrowed arteries and veins. We have been using angioplasty to open jugular and azygos veins in the neck and chest respectively to improve blood flow in people with MS. On follow-up, we have seen many of these individuals report significant symptom relief," he added.

MS subtypes within the Albany study group included 96 individuals with relapsing remitting, 66 with secondary progressive and 30 with primary progressive.

"Results of the study were quite exciting and promising," stated Mandato.

"We can attest to significant physical improvements reported in greater than 75 percent of those with relapsing remitting and primary progressive forms of multiple sclerosis. Additionally, mental health scores improved in greater than 70 percent of individuals studied. People with secondary progressive multiple sclerosis showed statistically significant improvements in both physical and mental health scores at a rate of 59 percent and 50 percent, respectively," he added.

"We ultimately broke this data down into physical and mental health scores for each person, and found improvement in both components of quality of life.

"In addition, we found a trend that patients undergoing this treatment more than 10 years after diagnosis did not respond as well as those with a more recent diagnosis," she added.

Mandato continued "To address the needs and concerns of those with MS who feel they cannot wait until definitive studies are completed, many doctors are currently offering treatments with the hope of helping individuals with hard-to-manage symptoms of MS,"

"Physicians who perform these treatments hope that this work will provide insights into the design of a prospective, randomized trial that is needed to rigorously evaluate the role of this treatment in MS.

"As we are still early in fully understanding the condition and its relation to treatment of CCSVI, it is our hope that future double-blinded prospective studies will be performed to further assess the durability of these results," he added.

These findings were presented at the Society of Interventional Radiology's 37th Annual Scientific Meeting in San Francisco, Calif.

Multiple sclerosis is an autoimmune disease that affects nerves and can leave the affected patient completely disabled. Test your knowledge on this condition by taking this quiz.
Advertisement
<< Meditation Improves Emotional Behavior: Study
Potential Transmission Risk in MSM: Study >>