Angioplasty Is A Safe Alternative To Open Heart Surgery 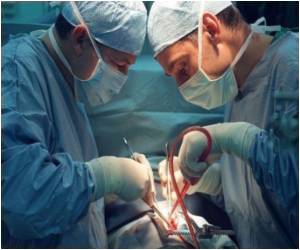 People who suffer from serious heart disease could benefit similarly from balloon angioplasty as from major open heart surgery, said a study released by South Korean researchers on Monday.

Bypass surgery, in which vessels are taken from elsewhere in a patient's body and sewn onto the heart to replace clogged ones, is the most common method of treating people with left main coronary artery disease.

The risk factors that work behind the scene before a heart attack are familiar to many. But do you realize the extent to which your lifestyle choices are putting your life at risk? Can you identify a heart attack when it occurs? Take our quiz and find out.
Advertisement

But the results of the randomized clinical trial of 600 patients who received either angioplasty or bypass surgery showed similar survival rates and about the same number of major adverse events like heart attack and stroke after one year.


Doctors have long debated which method is best for treating the narrowing of the arteries that is the major cause of heart attacks. Angioplasty is less invasive but can require more repeat procedures if the artery restricts again over time.

Interactive section of Medindia gives explanation for Angioplasty - 3D.
Advertisement
"In spite of higher revascularization after angioplasty, it can be a potential alternative if the two treatments have a similar risk of hard endpoints, such as heart attack, death or stroke," said Seung-Jung Park, lead study author.

"At the time this study was initiated, there was great enthusiasm about the outcomes of angioplasty, and as a result, off-label use rapidly spread without enough evidence. Therefore, initiation of a randomized study was urgent."

The PRECOMBAT trial's findings were presented at the American College of Cardiology conference in New Orleans. The study is also being simultaneously published in the New England Journal of Medicine.

The randomized study used a primary outcome measure combining four factors to measure safety and efficacy: death from any cause, heart attack, stroke, and ischemia-driven TVR (target vessel revascularization), or the need for more treatment after re-narrowing.

Death, heart attack and stroke rates were similar among the two groups.

Nine percent of patients in the angioplasty group experienced ischemia-driven TVR after two years, compared to 4.2 percent in the bypass group.

"The incidences of death, heart attack and stroke -- which are indicators of safety and have a significant impact on mortality -- were comparable," said Park.

"Although angioplasty did have a higher risk of TVR, this efficacy endpoint does not have a direct association with mortality and thus has a less significant implication than the safety outcomes," he added.

"Therefore we can conclude that angioplasty can be a feasible alternative to CABG (coronary artery bypass)."