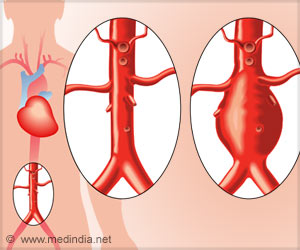 Aneurysms form as abnormal bulges or balloonings over an artery, and, if ruptured, can lead to serious health complications or even death. Some aneurysms can exist for a long time without rupturing, and the surgery involved in treating aneurysms can be quite risky, so a parameter to help guide surgeons is needed.

Advertisement
‘The recently developed parameter could help surgeons in the future in making decisions for treating aneurysms.’

Today, treatment decisions are made mainly by assessing the geometric parameters such as the size of an aneurysm, which is obtained from medical images. But the fluid mechanics are known to be an important factor in the initiation, growth and rupture of aneurysms. The factors determined by flow, such as the shear stress and its oscillations on the walls of an artery, require cumbersome flow measurements and numerical simulations. A simple parameter that depends on both flow and geometry, which can substitute flow factors (that require flow measurements and simulations) doesn't exist.


"This simple parameter, called 'aneurysm number (An),' is the ratio of time scales of two competing phenomena in aneurysms: First is the transport time scale, which represents the transport of a fluid particle through the aneurysm expansion," said Iman Borazjani, an associate professor at Texas A&M. "Second is the vortex formation time scale, which represents the formation of a vortex due to the pulsatile flow into an expansion."
Advertisement
The transport phenomenon creates a stationary shear layer through the expansion region, he explained, whereas the vortex phenomenon likes to create a vortex ring. If the transport time scale is smaller (An<1), then a stationary shear layer is formed and the flow mode is called the cavity mode. Otherwise, a ring vortex is formed (An>1) and the flow mode is the vortex mode.

The group's work is a significant breakthrough because they were able to show that not only can their aneurysm number classify the flow mode in both simplified and anatomic geometries, but also that the oscillations of shear stress are higher in the flow in the vortex mode (An>1). "This means that our simple parameter might be a good substitute for the oscillatory shear parameter -- without the need for challenging flow measurements and simulations to calculate shear on the wall," Borazjani said.

When the researchers first submitted their simplified work, several reviewers questioned whether the results for simplified geometries are applicable to real anatomic ones. "They weren't convinced, so we had to show that our parameter works for anatomic geometries. Now, a pair of articles are being published together," Borazjani said, explaining why the group went on to write a second article about their work. They first developed and tested their parameter for simplified (idealized) geometries in part I of their article, and then applied it to anatomic ones in part II.

Oscillatory shear, which is related to the group's parameter, is thought to affect the endothelial cells and promote inflammation, growth of aneurysms, and even their rupture. For example, "a vortex flow mode is more likely to rupture because it has a higher oscillatory shear," Borazjani said. "Therefore, we think our simple parameter can help surgeons in making decisions to treat an aneurysm in the future."

Abdominal Aortic Aneurysm
The dilatation and localized bulging of a part of aorta in the abdominal part of patient's body ......

Aneurysm
An aneurysm is an abnormal "ballooning" in blood vessels usually in the wall of arteries....

Takayasu Arteritis
Takayasu arteritis is a type of vasculitis that affects the aorta and its branches....