Ancient Turkey Was The 'Birth' Place of The English Language 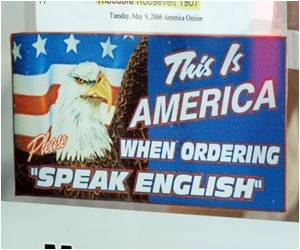 A new study has revealed that English has descended from a language that emerged about 8,000 and 9,500 years ago in Turkey.

Scientists from New Zealand, have traced the origin of languages classed as Indo-European to Anatolia, an ancient region of western Asia, which now covers most of the modern Turkey, the Daily Mail reported.

British English Puts Up a Brave Stand Against Americanisms

The differences in pronunciation on either side of the Atlantic have been well known since Fred Astaire and Ginger Rogers sang 'Let's Call The Whole Thing Off' in the 1937 film 'Shall We Dance'.
Advertisement

English is a part of the Indo-European language family, which includes more than 400 languages and dialects like German, French, Spanish, Russian, Polish, Persian, Hindi and ancient Greek, and all of them are said to have evolved from a common ancestor.


Experts have said that Indo-European languages spread out from the Middle East along with the agriculture.

Scientists led by Remco Bouckaert, from the University of Auckland, traced the origins of the Indo-European languages using a method that they borrowed from evolutionary biologists.

A popular English language cram school course in Japan charges $28,000 per year and is definitely not cheap.
Advertisement
Instead of comparing DNA from different species, the researchers looked at 'cognates' - which are words that have a common origin.

One example is "mother," which is called "mutter" in Germany and in Spanish is equivalent to "madre."

The words are so similar that there must have been a link in the language's history rather than the comparison occurring by chance.

By modelling how hundreds of words evolved through time, the researchers have been able to pinpoint the languages birthplace in what is now modern Turkey.

The research has been published in the journal 'Science.'

A survey report by South Asia Forum for Education Development has found that seventy-five percent of children in Pakistan are unable to read a sentence in English.
Advertisement
<< Even One Glass of Alcohol Per Day Increases Cancer Risk
Development Of Smartphone App That Helps Teachers Keep Trac... >>

Daily Calorie Requirements Find a Hospital Accident and Trauma Care Vent Forte (Theophylline) The Essence of Yoga Turmeric Powder - Health Benefits, Uses & Side Effects Indian Medical Journals Drug Side Effects Calculator Post-Nasal Drip Pregnancy Confirmation Calculator
This site uses cookies to deliver our services. By using our site, you acknowledge that you have read and understand our Cookie Policy, Privacy Policy, and our Terms of Use