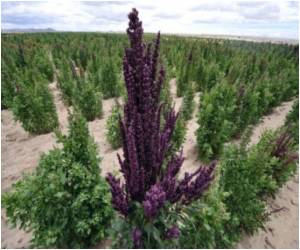 Grown high in the Andes for millennia, a grain the Incas so prized they deemed it sacred has become a global star and is now being touted as the health food of the future.

Quinoa, a good crop for harsher climes as it prospers in semi-arid conditions and high altitudes where rivals struggle, has nutrition experts salivating as it is chock full of protein and essential amino acids.

Researchers have found a component in soy that can prevent and even treat colon cancer.
Advertisement

"We don't ever get sick, because we eat the quinoa we got from our ancestors," Agustin Flores, a third-generation farmer in Bolivia's southern highlands, told AFP with a touch of salesmanship and a hesitant smile.


"When we are tired, after the working day, we have a drink based on the quinoa grain and that picks us up," said Flores, adding that he and his four sons also consume it in soups and cakes.

The Power Of Blueberry, Natures Superfood

A new study shows that a blueberry smoothie at breakfast can stop you flagging in the afternoon.
Advertisement
Quinoa was originally scorned by Spanish colonizers. At one point its cultivation was banned due to its use in what Spaniards saw as "pagan" ceremonies and the Incas were forced to grow wheat instead.

Known as chisaya mama or "mother of all grains", it was so revered by the Incas that the emperor would traditionally sow the first seeds of the season with special tools made out of gold.

But in the past 10-15 years, quinoa (Chenopodium quinoa) has made major inroads in Western cuisine and is often used as a substitute for pastas, risottos, gratins and taboules.

Ever looking for healthier options, chefs and nutritionists are beginning to take notice of the ancient grain, which has a light, fluffy texture and a mild, slightly nutty flavor.

"With its great nutritional profile quinoa has now become a food of the future," said Epifanio Murana, the head of the Quinoa Producers' Association.

"NASA scientists have called it exceptionally balanced and complete, and highly useful for astronauts' needs," he said.

Ruben Ramiro Miranda, a researcher at the University of Oruro, also sang the praises of the grain which is related to highly nutritional amaranth.

Quinoa can prevent inflammation and hypertension and helps "in the development of neurons, as well as healthy breast milk," he told AFP.

It is followed by Peru, with 42 percent of production and the United States, with six percent, official Bolivian data shows.

In Bolivia's Cotimbora-Challapata region, progress spawned by the grain's boom is plain to see. Export prices have almost tripled since 2007, now fetching 2,900 dollars a tonne.

"Education is getting better outfitted, nutrition has improved. People live better," said Mario Alanoca, the director general of the producers' group. "But what we worry about is the risk of drought."

No rain in November and December in Bolivia's highlands has left as much as 45 percent of the 2010-2011 crop, due in April-May, in danger, producers say.

"Here there should be some," farmer Flores points in his dusty field. "And there, there also should be some. But there's nothing there. Mostly it's the drought. We lost half of what we planted this year."

It may be a bad year for the crop, to be sure. But the surface area being planted in the grain has surged, a Franco-Bolivian study found. The IRD study also found that more quinoa was being planted on land at risk of freezes, and where animals once grazed, increasing potential land disputes.

Quinoa in its natural state has a coating of bitter-tasting saponins, making it unpalatable prior to processing.

Most quinoa sold commercially in North America has been processed to remove this coating. But this bitterness has beneficial effects during cultivation, as the plant is unpopular with birds and thus requires minimal protection.

Omega-3 - Does It Live Upto Its Superfood Image ?

Omega -3 has almost become a household name with the kind of publicity it has received about its bountful health benefits. But is it all that it promises to be?
Advertisement
Advertisement