An Injection That Attacks Deadly Forms of Cancer 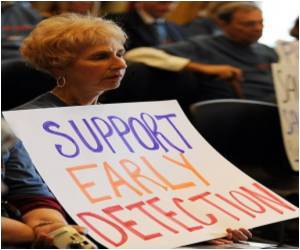 An injection that can destroy the most deadly cancers has been developed by scientists in a major, path-breaking effort.

The drug, which is already being tested on patients, shrinks tumours and stops them from spreading.

The research has shown that a form of hCG is also made by around half of bladder and pancreatic-cancers.


Some breast, bowel, ovarian and cervical tumours also pump it out. The most aggressive of tumours, they quickly grow and spread.

The injection, which is being developed in conjunction with U.S. firm Celldex Therapeutics, revs up the immune system, directing it to destroy hCG.

An ideal tumor marker for a cancer should be specific to that cancer and not generate false positive results.
Advertisement
This shrinks tumours and stops them from spreading, or metastasising.

"Not only are you causing the cancer to shrink, it is not metastasising. If you come in with chemotherapy and surgery, you've got a cure," the Daily Mail quoted Ray Iles as saying.

The jab has been given to 60 men and women newly diagnosed with bladder cancer.

"The vaccine has the potential to help us make rapid advances in the treatment of this invasive cancer," said Iles.

The destruction of hCG would also mean the jab acted as a contraceptive.

However, women's fertility should return to normal within a year after completing treatment.