An Army of US Chefs, Clinton's New Diplomatic Tool 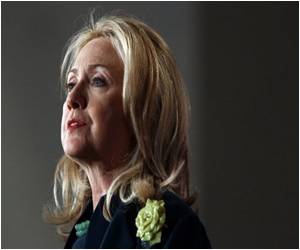 A new army of US diplomats is to begin navigating rough global waters is t be armed with sharp knives, chopping boards and culinary skills.

In her latest example of what she calls "smart power," the top US diplomat Hillary Clinton has recruited some of America's top chefs to help in her quest to spread US diplomacy and values around the world.

Around the World on Waste Cooking Oil: Couple's Feat

It has emerged that a couple has traveled around the world in a 22-year-old Mercedes school bus by using waste cooking oil for fuel.
Advertisement

More than 50 of the nation's finest culinary wizards, many of whom are household names across the United States, have signed up to join The American Chef Corps, newly launched at the State Department.


It is a first for the United States, which while it has often been accused by its opponents of seeking world dominance, is rarely charged with trying to butter up other nations with its fine cuisine.

Commercial Cooking Increases Risk of Dangerous Pollutants in the Environment

The whiff of delicous food wafting from restaurants may whet your appetite but there is a word of caution here, this could also mean you are treading in the air pollution zone.
Advertisement
"Unfortunately what most countries know about us is the fast food industry... but there is this most wonderful American culinary story just dying to be told," Ambassador Capricia Penavic Marshall told AFP.

When Clinton, the former first lady, first arrived at the State Department in 2009 as the new secretary of state "food was so second, tertiary" to the serious talks taking place every day, said Marshall.

"We started to chew on how can we engage further with our dinners, luncheon," she said. "Why aren't we inviting that in as part of the experience? Let's use that as a diplomatic tool."

As chief of protocol, Marshall's office oversees the lavish dinners and lunches laid on for visiting dignitaries. While donning their aprons to whip up a delicious meal, the new chefs corps will also help foster cross-cultural exchanges between the United States and other nations.

"The first sign of welcome when you walk into somebody's house is they give you something to eat, a little snack. Automatically your guard is dropped, you feel welcome," said pastry chef Duff Goldman, who has taken cake decorating to a whole new level.

"If people are coming to this country, and they sit down and I come out with a tray of cupcakes, 'Hey I got cupcakes I made in the color of your flag,' how cool is that?

"I feel welcome, I feel relaxed, progress will be made. If you just walk into a room and bring on clip boards, and turn on laptops it's so impersonal and cold."

Goldman -- who has become a hit star of the reality TV show "Ace of Cakes" featuring his own Baltimore-based bakery -- will undertake his first diplomatic mission to Bogota, icing a huge cake outside in front of some 6,000 people.

"You cook a meal and it's a way to send a message," agreed top chef Jose Andres, who moved to the US capital from Spain 20 years ago.

Most recently, Andres was asked to prepare a dinner for new French President Francois Hollande and his partner, Valerie Trierweiler, during their first visit to the White House in May.

Andres, who is the owner of seven restaurants around the Washington area and suburbs, said he created "an American historical menu", delving into his vast library of cookbooks.

From the 1931 "Joy of Cooking", the first edition of what has become one of America's most-published cookbooks, he whipped up an appetizer of shrimp with grapefruit with French dressing, served with a milk punch cocktail devised by Benjamin Franklin, a recipe dating back to the 1770s. This was followed by a gazpacho from the first book of American recipes "The Virginia House-wife" published in 1825 by Mary Randolph.

"She traveled around Europe when she was young, and she took many recipes from around Europe, French, Italian, and so she incorporated them into her book," Andres said.

"And one of the recipes was gazpacho, so you could argue that gazpacho is actually genuinely American," he laughed.

"Sharing a meal can help people transcend boundaries, and build bridges in a way that nothing else can. Certainly some of the most meaningful conversations I've had with my counterparts around the world have taken place at breakfasts, lunches and dinners."

The chefs are freely donating their time to the initiative, while the State Department is partnering with food manufacturers such as Mars, and will also be aided by the New York-based James Beard Foundation, set up in 1986 in honor of Beard, a cookbook author and dean of American cuisine.

"There is so much untapped potential in the power of food," White House assistant chef and senior policy adviser, Sam Kass, said at the launch.

"It's an incredible honor, but it is also an incredible responsibility," he said, adding "this is just the very beginning, and I hope in 10 years, 20 years, this just becomes diplomacy, this is it ... This is a key component of everything."

More Men Take Up Cooking to Seduce Their Sweethearts!

It is often said that the way to a man's heart is through his stomach, but now, it seems tables have turned, for a new trend has hit male society called Gastrosexual - which implies
Advertisement
<< Agartala: Northeast India's First Solar City
Teens Find It Hard to Kick the Butt as Adults: Study >>