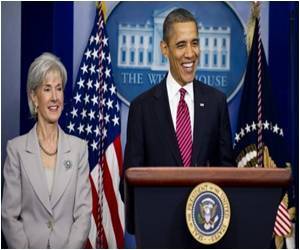 A poll, recently reported by the Kaiser Family Foundation, shows that 58% of Americans trust President Obama to make the right decisions on Medicare and the 2010 health care law.

This was reported in tucsoncitizen.com/usa-today-news.

The new government-approved format that health insurance companies must provide on their services to Americans, was unveiled on Thursday.
Advertisement

Conducted from Feb. 13 to 19 2012, the poll included 1,519 adult respondents. Only 43% of the respondents trusted the Republicans, Obama's archrivals on the same issues.


The President, thus, has pipped the Republicans past the post in influencing public opinion on key issues.

According to the poll, Rick Santorum is the most popular Republican in public perception on health care issues. About 70% of Republicans say they trust him, compared to about 65% for Mitt Romney and 60% for Newt Gingrich.

The cost of health insurance and Medicare were deemed 'extremely important' by a large number of voters - more than 1 out of 3.

The health care law and birth control were deemed crucial by 24%, and abortion by 21% of the respondents.

Many US insurers stopped offering individual coverage for children after the 2010 health care overhaul as no child could be refused on the grounds of pre-existing diseases.
Advertisement
<< Researchers Identify Potential Target to Prevent Cannabis M...
Chikungunya Virus may Infect America >>

Ten more states in the US will receive a total of $230 million in grants, the federal government said today.

Sanatogen Blood - Sugar Chart Color Blindness Calculator Nutam (400mg) (Piracetam) Drug Interaction Checker A-Z Drug Brands in India Calculate Ideal Weight for Infants Find a Doctor Accident and Trauma Care Selfie Addiction Calculator
This site uses cookies to deliver our services. By using our site, you acknowledge that you have read and understand our Cookie Policy, Privacy Policy, and our Terms of Use