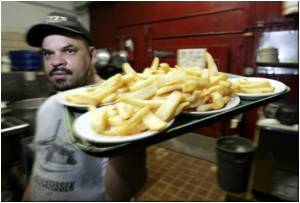 A typical American-style diet which is rich in fat and cholesterol play crucial role in the growth and spread of breast cancer, according to researchers at the Kimmel Cancer Center at Jefferson.

The study, published in the January issue of The American Journal of Pathology, examines the role of fat and cholesterol in breast cancer development using a mouse model. The results show that mice fed a Western diet and predisposed to develop mammary tumors, can develop larger tumors that are faster growing and metastasize more easily, compared to animals eating a control diet.

The research team led by cancer biologist Philippe G. Frank, Ph.D., Assistant Professor in the Department of Stem Cell Biology and Regenerative Medicine at Thomas Jefferson University, was interested in learning about the link between diet and breast cancer. The incidence rate of this cancer is five times higher in Western countries than in other developed countries. Moreover, studies have shown an increase in breast cancer incidence in immigrant populations that relocate from a region with low incidence. "These facts suggest strong environmental influence on breast cancer development," says Dr. Frank.


Dietary fat and cholesterol have been shown to be important risk factors in the development and progression of a number of tumor types, but diet-based studies in humans have reached contradictory conclusions. This has led Dr. Frank to turn to animal models of human cancer to examine links between cholesterol, diet, and cancer.

To avoid obesity we must consciously control the quantity and the quality of fat that we eat and our daily intake of fat should contribute no more than 25% of our calories.
Advertisement
The research team turned to the PyMT mouse model to determine the role of dietary fat and cholesterol in tumor development. This mouse model is believed to closely parallel the pathogenesis of human breast cancer. PyMT mice were placed on a diet that contained 21.2 percent fat and 0.2 percent cholesterol, reflective of a typical Western diet. A control group of PyMT mice was fed a normal chow that had only 4.5 percent fat and negligible amounts of cholesterol.

The researchers found that tumors began to develop quickly in mice fed the fat/cholesterol-enriched chow. In this group, the number of tumors was almost doubled, and they were 50 percent larger than those observed in mice that ate a normal diet. "The consumption of a Western diet resulted in accelerated tumor onset and increased tumor incidences, multiplicity, and burden, suggesting an important role for dietary cholesterol in tumor formation," Dr. Frank says. There was also a trend towards an increased number of lung metastasis in mice fed the fatty diet, he adds.

To confirm the aggressive nature of the cancer in animals fed a cholesterol-rich diet, the researchers examined the levels of several biomarkers of tumor progression and found a signature of a more advanced cancer stage, compared to tumors that developed in the control group.

The researchers also showed that plasma cholesterol levels in experimental mice that developed tumors were significantly reduced compared to a group of "wild-type" mice - animals with no predisposition to develop tumors - that was also fed a cholesterol-rich diet. "This suggests that tumor formation was responsible for the reduction in blood cholesterol levels observed in our animals," indicates Dr. Frank.

"These data provide new evidence for an increase in cholesterol utilization by breast tumors and thus provides many new avenues for prevention, screening, and treatment," indicates Dr. Frank. These findings suggest that use of cholesterol-lowering drugs, such as statins, may both protect against breast cancer as well as treat patients carrying tumors. Since researchers also found that blood cholesterol levels dropped significantly as tumors began to develop, the study indicates measuring blood cholesterol levels may also be an effective method of screening cancer development.

This research team also discovered the same association between cholesterol and growth of prostate cancer in mice in a study published in the December issue of The American Journal of Pathology. The results of these two new studies indicate, according to Dr. Frank that, "Cholesterol does indeed seem to be an important factor in the regulation of tumor formation in several cancer types."

Breast cancer is one of the leading causes of cancer deaths among women. It is often said that a woman who breast-feeds is at a lower risk of developing cancer compared to another who does not .Are these mere old wives tales or is there some truth in it? This quiz on breast cancer has all the details.
Advertisement
<< First Screening Tool for Traumatic Brain Injury Developed
Immediate Steps Sought for Saving Poor Children Dying of Ne... >>