American Officials Confirm First Case of MERS in the US 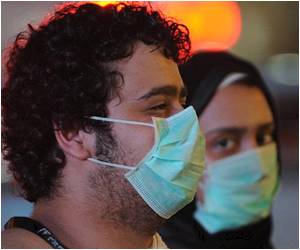 Health officials in the United States revealed that MERS, which first surfaced in the Middle East, has arrived at the American shores after confirming the first case of the dangerous respiratory virus.

The person infected with Middle East Respiratory Syndrome Coronavirus (MERS-CoV) is a health care provider who had traveled to Riyadh for work, the Centers for Disease Control and Prevention said.

The name, gender and location of the patient were not disclosed.


"New diseases can be just a plane ride away," Anne Schuchat, director of CDC's National Center for Immunization and Respiratory Diseases, told reporters.
Advertisement
The patient is being cared for in an Indiana hospital and is "isolated in stable condition," said Schuchat, adding that lab tests confirmed the infection Friday.

There is no cure for MERS-CoV, no medicine for treating it and no vaccine to prevent it.

The virus causes fever, breathing difficulties and can lead to pneumonia and death in some patients.

According to the CDC, 401 people in 12 countries have been confirmed to have MERS-CoV, including the US patient.

The latest death toll announced by Saudi health authorities is 107.

Some cases have spread among family members and in a hospital setting, but sustained transmission among the general public is rare, the CDC said.

There appears to have been a rise in cases lately, but scientists have no indication that the virus is mutating or becoming more infectious, said Ian Lipkin, a professor of epidemiology at Columbia University in New York.

"It has not evolved to become more capable of human to human transmission. It is the same virus we see in camels," he told AFP.

"There is concern over an uptick in cases but there are many explanations for that," Lipkin added. "One is that we are looking for it, and when you are looking for things, you find them."

Officials are trying to track down people who were near the patient, who on April 24 flew by plane from Riyadh to London, and then flew to Chicago, Illinois, where the patient boarded a public bus to Indiana.

However, the CDC declined to make public the name of the airline or any other details about the person's trip, and said that the Department of Homeland Security was working on locating people who traveled near the patient.

It was on April 27 that the patient began to experience shortness of breath, coughing and fever. The person was hospitalized a day later.

The incubation period is about five days between the time of the infection and the appearance of symptoms, said Schuchat.

Anyone who came in close contact with the patient within 14 days of infection could be at risk.

Officials declined to say how the patient became infected, or how many people came in contact with the patient.

It was also not known whether the patient had direct contact with camels during the Saudi trip.

Schuchat said there was a low risk of MERS spreading to the general public, but added that the situation was considered "fluid."

She said the CDC is not currently recommending that people change their travel plans.

MERS is considered a deadlier cousin of the SARS virus that erupted in Asia in 2003 and infected 8,273 people, nine percent of whom died.

However, Daniel Lucey, an infectious disease expert and adjunct professor of microbiology and immunology at Georgetown University Medical Center, said that the MERS virus is not considered highly contagious.

"It can spread through the air, but it can't travel very far," he told AFP, describing MERS as much harder to spread than SARS, or even the flu.

The prognosis is worst among patients who have other health problems or who have compromised immune systems.

Immunity Against MERS Virus Soon to be Provided by Vaccination
A new vaccine that produces immunity against the recently emerged Middle East Respiratory Syndrome ....