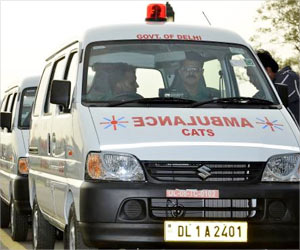 A three-in-one invention called AmbuPod is one of the few products on display that caught attention at Global Entrepreneurship Summit (GES).

It's not an ambulance on four wheels but can be pulled by a motorbike so that it can move quickly through heavy traffic on city roads or on narrow roads in villages. It can zip past on city roads or traverse through narrow roads in countryside to rush a patient to hospital, and when idle can convert into a mobile clinic with all out-patient facilities.

Advertisement
‘The zero polluting AmbuPod has hi-tech software to facilitate sharing of patient's vitals with the hospital doctor including ECG.’

"It has oxygen and all that an ambulance will have. When idle it can be converted into a mobile or makeshift clinic with all out-patient and diagnostic facilities," Yamini Lavanian, co-founder and Director, AmbuPod, said.


The Pune-based firm has filed the patent for the "amicro-ambulance and mobile clinic". AmbuPod has a bed and other medical equipment. When deployed in a remote area or village, it can also be used as a telemedicine facility.
Advertisement
"The medical attendant in AmbuPod feed all the symptoms of patient and results of diagnostic tests in the app. The same is accessed by the doctor sitting in the city who then suggests medicines," she said.

The facility can treat 30 to 60 patients every day. "As soon as there is an emergency, it can be connected to a bike for use as ambulance," she explained.

A concept of Dr Lavanian, it was designed and assembled by a team of engineers. The AmbuPod, which costs Rs 4 lakh, focuses on mother and child care. It is equipped with ECG machine, and a medical attendant sitting in the pod can give medical resuscitation while on the way. Like any ambulance, it has oxygen, nebulizer and suction equipment.

"We have tested in cities and villages and in all terrains and it works perfectly," said Lavanian.

The company is looking for partners and investors to help scale the product and develop saleable model. Initially, it plans to deploy this in at least 50 villages.

Though yet to get orders, the company is in talks with various hospitals and NGOs. "We also plan to export it to African countries because they also have similar healthcare problems," she said.

"Our company representatives say they were overwhelmed by the response at GES as many participants from various countries saw the product and evinced interest," she added.

Source: IANS
Advertisement
<< When It Comes to the Tattooing, Hygiene Is A Big Concern
Eye Contact With Baby can Help Them Communicate Effectively >>

Air Ambulance Helps Transport Harvested Heart For Transplant
Parents of a teenager who was declared brain dead after a road accident came forward to donate his ....

Waiting For the Ambulance Can Reduce Chances Of Survival in Gun Shot Victims
Victims of gunshots and stabbings are significantly less likely to die if they're taken to the ......

Telemedicine Ambulance Improves Stroke Care
The sooner someone is treated for stroke, the better chance they have for survival and an improved ....