ALS Disease Process may be Blocked by LSUHSC Research Discovery 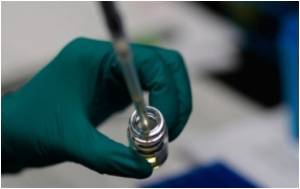 The research is available online in the Advanced Access section of the journal Human Molecular Genetics website, posted on April 12, 2011. It will be published in an upcoming issue of the journal.The fruit flies were engineered to carry and express a mutated human FUS gene. This mutated FUS gene has been shown to be one of the major causes of both familial and sporadic ALS. In the fruit flies, the resulting neurodegeneration impairs their ability to walk or climb and the defect is also easily visualized in the structure of their eyes. In addition, the flies carrying the defective FUS gene demonstrate hallmarks of the human disease, such as an age-dependent degeneration of neurons, accumulation of abnormal proteins and a decrease in life span.

Also as seen in human ALS patients, the disease-causing FUS protein that's formed from the gene abnormally moves to the cytoplasm rather than staying in the cell nucleus. Dr. Pandey's lab found that blocking this abnormal migration could block the disease process. All these features make the fly model a valuable resource for performing drug screens to identify drugs that could modify the effects of the mutated gene.


"These findings prompt us to look for drugs that can help in keeping the defective FUS protein in the nucleus as a potential therapeutic intervention" notes Pandey. "The fly model is an inexpensive and fast way to study many human diseases such as cancer, Alzheimer's disease and Parkinson's disease. Many basic biological processes are well conserved between humans and fruit flies, and nearly 75% of human disease-causing genes are believed to have a functional partner (homolog) in the fly that makes these small animals a highly tractable model system."

Bell''s palsy is facial nerve disorder that causes weakness of the muscles on one side of the face. Its cause is unknown but most people make a full recovery within 8 to 12 weeks.
Advertisement
Dr. Pandey's group found that normal FUS interacts with another major human ALS-linked protein TDP-43, but mutated FUS interacts abnormally with normal TDP-43. Mutations in the TDP-43 gene have also been found to cause ALS. Interestingly, these two ALS-linked proteins do not seem to interact if trapped in the nucleus.

According to the National Institutes of Health, Amyotrophic Lateral Sclerosis, sometimes called Lou Gehrig's disease, is a rapidly progressive, invariably fatal neurological disease that attacks the nerve cells (neurons) responsible for controlling voluntary muscles. The disease belongs to a group of disorders known as motor neuron diseases, which are characterized by the gradual degeneration and death of motor neurons. Motor neurons are nerve cells located in the brain, brainstem, and spinal cord that serve as controlling units and vital communication links between the nervous system and the voluntary muscles of the body. Messages from motor neurons in the brain (called upper motor neurons) are transmitted to motor neurons in the spinal cord (called lower motor neurons) and from them to particular muscles. In ALS, both the upper motor neurons and the lower motor neurons degenerate or die, ceasing to send messages to muscles. Unable to function, the muscles gradually weaken, waste away (atrophy), and twitch (fasciculations). Eventually, the ability of the brain to start and control voluntary movement is lost.

"Our next goal is to identify other factors such as proteins or RNA that mutant forms of FUS target so that we can get more insights into the disease mechanisms" said Nicholas Lanson Jr., an LSUHSC research associate and first author of the paper.

Clinical trials are experiments that yield useful information to clinicians if a particular treatment is of any value to a patient.
Advertisement
<< Role of Alcohol Drinking in the Risk of Cancer
Another Look at Testosterone-Prostate Cancer Link Needed, S... >>

Nutam (400mg) (Piracetam) Diaphragmatic Hernia Calculate Ideal Weight for Infants Blood Donation - Recipients Turmeric Powder - Health Benefits, Uses & Side Effects Color Blindness Calculator The Essence of Yoga Find a Doctor Find a Hospital Accident and Trauma Care
This site uses cookies to deliver our services. By using our site, you acknowledge that you have read and understand our Cookie Policy, Privacy Policy, and our Terms of Use