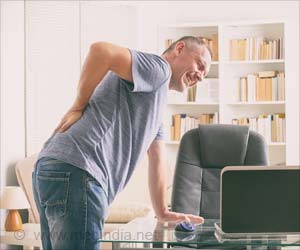 People awaiting for hip replacements are more likely to suffer extreme pain or discomfort, reports a new study. The findings of the study are published in the Bone and Joint Journal.

The research team also found that 12 percent of patients on waiting lists for knee replacements considered themselves to be in a similarly acute state of health.


The figures are worse than for many other chronic health conditions, such as diabetes, heart failure or lung diseases.

A team of researchers at the University of Edinburgh say the findings disprove the perception that hip and knee arthritis only causes mild discomfort and that surgery is considered optional.
Advertisement
They measured more than 4000 Scottish patients' health conditions using an internationally approved score called the EQ-5D - the first time this has been done.

This rating measures a patients' ability to perform routine activities and look after themselves, as well as their levels of mobility, discomfort and anxiety.

The research team measured the health states of more than 2000 people waiting for a total hip replacement and found that 19 percent were in extreme pain or discomfort - a state defined as "worse than death" by the EQ-5D.

Some 12 percent of the 2000-plus patients waiting for knee replacements said they were in a similar condition.

Hip and knee replacements are highly cost-effective treatments with long-lasting and almost immediate benefit from the pain and disability from arthritis, according to the study's authors.

Despite this, patients receiving these procedures are the first to have their treatment limited or canceled.

Chloe Scott, Consultant Orthopaedic Surgeon and honorary senior clinical lecturer at the University of Edinburgh, said: "Patients with the most extreme EQ-5D scores should be a priority for health care delivery. Indeed, given the overall high levels of pain and disability described by all patients awaiting joint replacement compared with most other illnesses, access to appropriate treatment should be free and available to all at the time of need not limited by cost or bed availability."

Source: Eurekalert
Advertisement
<< Cashew Nut Shells may be the Next Organic, Safe Sunscreen In...
Wiggling It Beats a Path for Better Performance at School: S... >>