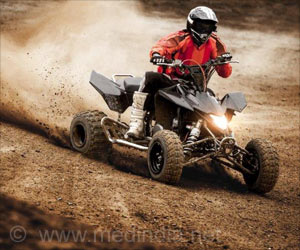 Quad Bike Accidents, the Reason Behind Most Chest Injuries in Children

In 2014, 24,800 children under the age of 16 were treated in hospital emergency rooms nationwide for Quad bike-related injuries.
Advertisement
‘The factors linked to high rates of ATV-related death and injury for children are more powerful machines, younger drivers and lack of safety equipment and risky driving behavior.’

Pranikoff and colleagues reviewed data from 16 published studies conducted from 2000 to 2010 on the epidemiology and risk factors among ATV-related injuries in American children.


Data from 2013, the most recent reporting year from the U.S. Consumer Product Safety Commission, showed that there were an estimated 99,600 ATV-related injuries in the United States that required at least emergency department treatment. Of those, approximately 25 percent were in children under 16.

Road Accidents may be Minimized by Mobile Phone Jammers

Mobile phones are fast turning into a global killer even thought they may have brought instant communication within the reach of all
Advertisement
The factors that appear related to the relatively high rates of death and injury for children are more powerful machines, younger drivers and lack of safety equipment and risky driving behavior, Pranikoff said. The most common causes of ATV injuries among young riders are vehicle rollover, collision with a stationary object and ejection from the vehicle.

"Unfortunately, legislation and programs designed to reduce risks have largely been unsuccessful, so we need to try a different approach to reduce injuries," he said.

Peer-to-peer and brief interventions, especially with the use of motivational approaches, have shown promise in changing risky behaviors in other arenas but have not been studied with respect to ATVs.

"As ATV use continues to rise in the United States with bigger and faster machines becoming more prominent, research to define effective means of changing ATV-riding behaviors in children, whether implemented in the hospital, school of other settings, will be crucial in reducing pediatric injury and death," Pranikoff said.

Road Accidents Kill 1.25 Million Each Year, Africa is the Deadliest: WHO Report

Traffic accidents are the leading cause of death among 15-29 year olds worldwide and cost governments on average about 3% of their annual gross domestic products.
Advertisement
<< Gambling Addicts Lack Ability To Assess High Risk Situations...
Brain Cancer Patients Can Survive Longer With Combination Th... >>

The world's first screening tool to help reduce workplace accidents and illnesses was developed by an international team of sleep researchers.

Nutam (400mg) (Piracetam) Drug - Food Interactions Sinopril (2mg) (Lacidipine) Daily Calorie Requirements How to Reduce School Bag Weight - Simple Tips A-Z Drug Brands in India Drug Side Effects Calculator Sanatogen The Essence of Yoga Drug Interaction Checker
This site uses cookies to deliver our services. By using our site, you acknowledge that you have read and understand our Cookie Policy, Privacy Policy, and our Terms of Use