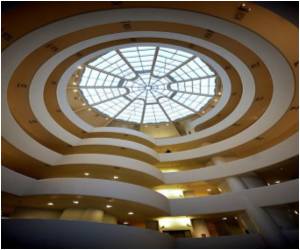 The celebrated museum of modern and contemporary American art has turned its back on the bourgeois satisfaction of the Upper East Side to move downtown to the achingly cool Meatpacking District.

Sandwiched between the Hudson River and the High Line walkway, the new nine-storey building of concrete, steel and glass is more than double the size of its previous premises on Madison Avenue. Its asymmetric, angled style reflects the industrial vibe of the neighborhood. Its high ceilings, reclaimed pine floors, vast windows and large terraces fill the building with light and offer spectacular views across Manhattan and the Hudson.


Europe-based Piano, who famously built the Pompidou Centre in Paris in the 1970s, said he was after a similar effect. The vast, glass hall, which the Italian calls "the lobby piazza" was designed "to let people come in, not be intimidated" and feel welcome he explained at a news conference. "You are entering a new world, the world of art and freedom," he said. "Art is about freedom. I hope you will feel that the building is designed to follow that freedom, to make that freedom visible."
Advertisement
- Free World -

Besides the exhibition rooms and a huge space unencumbered by structural columns, the Whitney has an education center, library, 170-seat auditorium, conservation center, cafe and restaurant. The entire museum, which some say looks a bit like an oil tanker, covers 220,000-square-feet (20,500 square meters). It has 40,000 square feet of indoor exhibition space and 13,000 feet of outdoor terrace galleries.

"This is a transformative moment for the Whitney," said museum director Adam Weinberg.

Larger and more flexible galleries offer more opportunities than ever before, allows the Whitney to show far more of its permanent collection, and use the outdoors for sculptures and performances. Weinberg called it a "site for discovery and risk taking. Here the most important, challenging and courageous artists of our time will have a constant presence."

The Whitney, which exhibits only American art from the 20th and 21st centuries, was founded in 1930 by artist and benefactor Gertrude Vanderbilt Whitney and has a permanent collection of more than 22,000 works by more than 3,000 artists.

Its inaugural exhibition "America is Hard to See" opens May 1 and runs until September 27, exploring the themes, ideas and passions that have preoccupied American artists from 1900 until today. AIDS, war, identity and racial identity are just some of the issues covered by some of the more than 600 works by 400 artists will fill ever indoor and outdoor exhibition space.

- Returning to its Roots -

A quarter of the works have rarely if ever previously gone on public display. The exhibition is grouped into 23 themes which unfold chronologically, culminating with the 1960s until the present day. Through canvases, collages, photographs, furniture, videos, even vacuum cleaners and a huge patchwork of cuddly toys, it tells the story of American art.

The cost of the $422 million building was financed overwhelming by private donations. Bob Hurst, co-chairman of the board of trustees said the museum exceeded its campaign goal of $760 million. The Whitney bought the land from the city, which also allocated $55 million to the project under previous billionaire mayor Michael Bloomberg.

Neil Bluhm, president of the board, said that in moving to the Meatpacking District the museum was returning to its roots just "a few blocks" from the site of the first Whitney. In an area packed with art galleries, designer boutiques and fashionable restaurants, the Whitney offers views south to the Statue of Liberty, east to Manhattan and west across the Hudson.

The museum will be open six days a week, closed on Tuesdays. Tickets are $22 for adults and free for those younger than 18.

Billionaire Donates Exclusive Cubism Collection to NY Museum
One of the largest and finest cubist collections in the world, painstakingly pieced together by a .....

Poland's Jewish Past Brought Back to Life Via New Museum
A new museum in Warsaw is celebrating a lost Jewish community in Poland that was the world's ......

Swiss Museum Will Announce Its Decision on Accepting Nazi-Era Art Hoard
A Swiss museum will announce Monday about its decision on accepting a German recluse's bequest of a ...