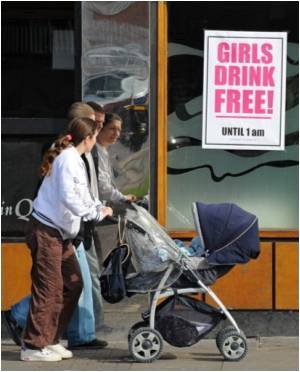 UK hospitals have seen an increase in alcoholic admissions by 825 a day to almost a million in five years, discloses a new survey.

More than a quarter of drinkers exceed recommended limits every week, the North West Public Health Observatory said in its study, reporting that there were 945,469 admissions to hospital for alcohol-related harm in the 2008/09 year.

Northerners are the hardest drinkers but the most alcohol-related crimes are committed in London, according to the Local Alcohol Profiles for England (Lape 2010) report, compiled by academics based at Liverpool John Moores University's Centre for Public Health.


Professor Mark Bellis, the observatory's director, said: "The price we pay for turning a blind eye to the real extent of alcohol abuse across England is reflected in the new Local Alcohol Profiles for England and it is a price that is paid especially by the poorest communities.

Take this anonymous self-test to evaluate your alcohol consumption and determine if your drinking pattern poses a risk for hazardous health conditions.
Advertisement
"The English death toll from alcohol now exceeds fifteen-and-a-half thousand people every year.

"It is time to recognise that we are not a population of responsible drinkers with just a handful of irresponsible individuals ruining it for others.

"Over one in four drinkers exceed weekly limits according to national surveys and alcohol sales figures suggest the number is much higher.

"At weekends, by the early morning hours our city centres do not have just a few drunk individuals in them - actually most people are drunk yet continue to be able to buy alcohol despite such sales being illegal.

"We need to see the real cost of alcohol reflected in the price it is sold at and the warnings about the dangers that alcohol represents not relegated to a tiny corner in alcohol adverts, but written large enough for people to recognise the seriousness of the risks."

Researchers found that two thirds (65 percent) of all local authorities suffering the highest levels of overall harm are in England's North West and North East.