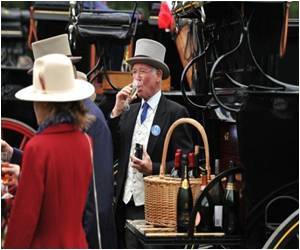 One in five elderly people binge on alcohol beyond recommended levels, shows study.

According to the study, one in five men and ten per cent of women over 65 were found to drink too much.

The experts said that impending arrival into old age of the "baby boomer" generation, who have tended to drink more heavily than previous generations, is expected to dramatically increase the problem, the Telegraph reported.


While a lot of attention is given to the drinking problems among young people, the elderly are most at risk as they have more time on their hands, may be lonely and often have plenty of disposable income.

Alcohol consumption for recreation and relaxation has become a universal culture. But do you think you know enough about this drink - Take this quiz and find out.
Advertisement
Older people are also more likely to face conditions, which ought to prevent them from drinking in the first place, like diabetes or high blood pressure, or to be using medications, which should not be mixed with alcohol.

"There is no reason why people can't drink in old age but for some people, in particular those over 75, the body really finds it hard to metabolise alcohol," Dr Sarah Wadd, who led the study for Alcohol Research UK, said.

"The biggest problem we face is that drinking problems are harder to spot in older people."

"We think they are less likely to come forward to ask for help due to the shame or feeling it is not appropriate for them to have an alcohol problem in old age, and GPs and social workers are less likely to ask older people about alcohol because they tend to feel very uncomfortable about it," Wadd added.

Accident and Trauma Care A-Z Drug Brands in India Calculate Ideal Weight for Infants Selfie Addiction Calculator Nutam (400mg) (Piracetam) Noscaphene (Noscapine) Drug Interaction Checker Turmeric Powder - Health Benefits, Uses & Side Effects The Essence of Yoga Loram (2 mg) (Lorazepam)
This site uses cookies to deliver our services. By using our site, you acknowledge that you have read and understand our Cookie Policy, Privacy Policy, and our Terms of Use