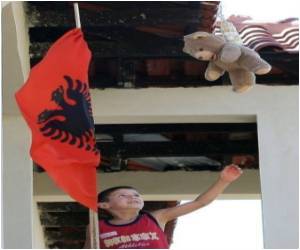 A weather-beaten teddy bear hangs from the front of Izet Sina's home. But this tattered old toy is no abandoned play thing. It is designed to protect the family from misfortune and ward off the "evil eye".

The 51-year old farmer believes all the woes that have befallen him -- his wife's death, property disputes, and the flooding of his land by torrential rains -- were caused by the ill will of his relatives and neighbours.

In his search for good luck, Sina, like thousands of his compatriots, has turned back to the superstitious traditions that largely disappeared under communism, but which have now made a come-back.


"It will preserve my house from "Syri i keq" (the evil eye) and chase away any evil which will not dare now to touch my family," he says of the teddy bear.

Albania, often accused of being a transit spot for drugs destined for Western Europe, is increasingly becoming a country of consumption, providing authorities with a tough new challenge.
Advertisement
Sina, who lives in Kuc, a tiny village some 30 kilometres (18 miles) northwest of the capital Tirana, strongly believes in the power of the soft toy.

He says misfortune came his way after his relatives and neighbours effectively cursed him out of envy for the house he built.

Now the father of seven believes the teddy bear will protect both the house and the family from any new catastrophe.

In the 20 years since the fall of communism, superstitious practices have thrived in Albania.

Besides new fads such as the stuffed toys, traditional amulets have also reappeared: horseshoes, red flags, garlic are often seen on homes and even luxury apartments in Tirana's posh neighbourhoods.

The Balkan country's brutal communist dictatorship which ruled for nearly half a century from 1945 to 1992 tried to stamp out all such traditions as well as religion itself.

Late communist leader Enver Hoxha, who kept the Albanians in isolation for decades, even boasted of making Albania the first atheist country in the world.

After the regime crumbled in the 1990s Albanians began to embrace the superstitious traditions of their ancestors.

"Ram horns, garlic, red flags, all are equally highly respected by the Albanians as a means of protecting oneself from the evil eye," explained anthropologist Aferdita Onuzi.

She describes her compatriots as essentially "divided between religion and superstition, belief and agnosticism".

According to sociologist Zydi Dervishi this passion for the supernatural is partly caused by the feelings of insecurity and fragility in Albania which has faced considerable challenges in the past two decades.

"The fear of the unknown, this powerless feeling in the face of almost omnipresent corruption and the absence of laws, incite a lot of people to take a refuge in superstition," he says.

And when this does not work, there is always magic.

In her modest home hidden at the far end of a shabby street on the outskirts of Tirana, Mereme Coba, 40, sees dozens of unfortunates each day.

She is a "Njeri i Mire" or good woman, a term used to describe those thought to be in direct contact with God. Many Albanians believe that the "nusks" or charms they prepare can cure diseases and chase misfortune away.

On a normal weekday about a dozen people patiently wait in blistering heat for their turn. Most are women with children, but there is also one young man. Many seem confused, looking for a cure for problems ranging from unemployment and family dramas to ill health.

"My girl is five years old, she cannot walk," Leta, a thirty something mother said with tears in her eyes.

She has seen several regular doctors but has lost confidence in their abilities and has turned to magic as a last resort, she told AFP.

"In order to protect oneself, the children, the pregnant women, the travelers... and the men of state must prepare three coffee beans, a head of a dried or salted snake," Coba prescribes in a high-pitched voice.

The required objects must then either be left in their home or carried with them wherever they go, she insists.

In addition to the advice, Coba draws several unrecognisable characters and hands over a folded paper, again to ward off the evil eye.

She tells AFP she only accepts money if people want to pay her.

She was sent by God to help the people, she says.

Albanians spent more than 100 million dollars on gambling last year, an increase of almost 70 percent on the year in one of Europe's poorest countries, the tax office said Thursday.
Advertisement
Advertisement
This site uses cookies to deliver our services.By using our site, you acknowledge that you have read and understand our Cookie Policy, Privacy Policy, and our Terms of Use  Ok, Got it. Close
×