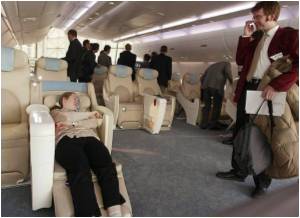 Women who have survived breast cancer can fly without any worries, says a new study.

University of Alberta researcher Margie McNeely said that the theory that breast cancer survivors are at a risk of lymphedema, is outdated.

Women have often been warned that post breast cancer, pressure changes in an airplane cabin could trigger lymphedema, chronic swelling in the arm.


However, McNeely said that the risk is for those women who have had lymph nodes removed from the armpit, a common procedure during cancer treatment. When there is the potential for chronic swelling, these lymph nodes work to drain the fluid.

Breast lumps must never be neglected but instead be subjected to medical examination to rule out cancer.
Advertisement
McNeely and Australian researcher Sharon Kilbreath compared two such groups of patients - one that had had their lymph nodes removed and one that had not. All the women were breast cancer survivors.

Findings indicated that 95 per cent of the women had no arm swelling. Four women had a slight increase but at a follow-up test, done six weeks later three were back to normal and only one woman was found at possible risk for chronic swelling.

McNeely said that this research shows that while there is a risk of developing lymphedema during flight, that risk is very low.