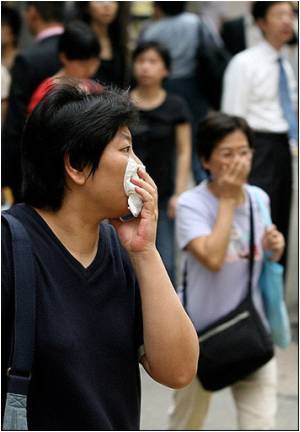 Low-grade inflammation may contribute to the higher incidence of type 2 diabetes in women exposed to air pollution, according to German researchers who published the finding in the peer-reviewed journal Environmental Health Perspectives (EHP).

The study comprised German women living in highly polluted industrial areas and in rural regions with less pollution. The researchers analyzed data from 1,775 women who were 54 or 55 years old when they enrolled in the study in 1985. Between 1990 and 2006, 187 participants were diagnosed with type 2 diabetes, which often starts in middle age. Air pollution data from monitoring stations and emission inventories run by local environmental agencies were used to estimate each woman's average exposure levels.


Exposure to components of traffic pollution, particularly nitrogen dioxide (NO2) and soot in ambient fine particulate matter (PM), was significantly associated with a higher risk of type 2 diabetes. An increase in NO2 or PM corresponding to the difference between exposure at the 75th percentile and exposure at the 25th percentile was associated with a 15-42 percent higher risk of type 2 diabetes.

Learn more about Type 2 Diabetes, a disease that is taking the world by storm!
Advertisement
Living within 100 meters of busy roadways more than doubled the diabetes risk.

Measurements of C3c, a blood protein and marker for subclinical inflammation, predicted the elevated diabetes risk. Only women with the highest C3c levels at enrollment had an increased risk for type 2 diabetes related to traffic pollution during the 16-year follow-up period. Just how C3c might affect diabetes remains unknown. Immune cells in the airways may first react with air pollutants, setting off a widespread chronic inflammatory response, which in turn may make individuals more susceptible to developing diabetes.

Although the study focuses only on women, study leader Wolfgang Rathmann says, "We have no reason to assume sex differences in the association between air pollution and diabetes risk, but we do not have data on this issue."

Almost one-third of the people are unaware of the risk factors of diabetes. Find out if you run the risk of diabetes by using Diabetes Risk Assessment calculator.
Advertisement
Advertisement