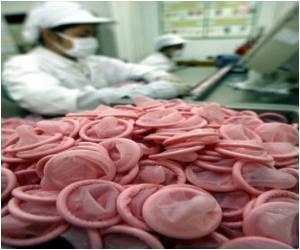 Health authorities in Kenya said Wednesday the country was facing a condom shortage due to high demand and procurement bottlenecks, and made an emergency order of 45 million condoms.

A January consignment of 19 million condoms lasted for around six weeks. The emergency supply from the US President's Emergency Plan for AIDS Relief is expected on April 10.

A smartphone application which will help users find the nearest location where condoms are available for free , has been launched on Valentine's day.

"The demand was eight million per month, then it went to 12 million and currently stands at around 20 million. That gives you the number of encounters people would have," Public Health Director Shahnaaz Sharif told reporters.


Kenya has a population of about 40 million.

Identifying sexual offenders may now get easier with the help of a new method that can detect fingerprints containing condom lubricants left behind.
<< Institute of Medicine Recommends Clinical Standards Reliabl...
Child Diarrhea Deaths Can Be Halved If Simple Measures Impl... >>