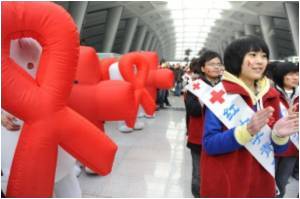 The battle against AIDS is a human rights issue , rock star and AIDS activist Annie Lennox said Monday, warning against reduction in funding due to the global recession.

Funding the fight against AIDS "should not be something charitable," the former Eurythmics singer told AFP in an interview.

The issue was "not about charitable handouts," said Lennox, who is attending the 18th World AIDS Conference being held in the Austrian capital this week.


"I'm not denigrating charity per se. But we need to have a paradigm shift in our heads. We need to say: this is about human rights."

Lennox shared the view of UN Secretary General Ban Ki-moon that "significant progress" had been made in the 29-year fight against AIDS.

Epidemiologic studies indicate three broad yet distinct geographic patterns of transmission
Advertisement
But the singer was "very concerned (that) in the climate of the current recession, the people who are usually first hit are the most vulnerable."

There were "billions of people, two-thirds of them women, two-thirds the poorest people in the world. And they are way, way below the bottom rung of the ladder, living in conditions that are mediaeval. It's incredible, the disparity, the gap," Lennox said.

The singer was to lead a Human Rights March in central Vienna on Tuesday evening, in which around 15,000 people were expected to take part.

Sccheduled to set off at 6:30 pm (1630 GMT) and proceed along the Austrian capital's historic "Ring" circle road, it would end at the central Heldenplatz or Heroes' Square at around 8:00 pm, where Lennox would then give a small concert, organisers said.

The singer's AIDS activism dates back to the 1980s and she recorded a song for "Red Hot and Blue", a benefit album for AIDS awareness, in 1990.

But it was Nelson Mandela who inspired her to get involved in recent years, she said.

"I was invited to be one of the artists taking part in the launch of Mandela's '46664' Foundation in Cape Town in South Africa in 2003," she said.

At the time, in an address to the international media in the former exercise yard of Robben Island, where he had been a prisoner for 25 years, Mandela described the HIV/AIDS pandemic as genocide.

So, Lennox decided to launch her campaign "SING" to give a voice for women and children with AIDS and HIV.

The project is small -- "It's basically just me," she joked -- but with her visibility as a pop star and recently appointed as a UNAIDS ambassador, she was able to "gain access to people in higher places."

"The beauty of that is although I'm small and I'm just one person, I'm flexible and I'm able to work in different capacities," said Lennox, who is also an ambassador for the Red Cross and works with OXFAM and Save the Children.

"I think one of the weaknesses about the response to HIV is that you have so many different NGOs and they're all having to compete for their own separate patch," she said.

But "we must speak with a united voice. That's why I love this kind of conference because it actually brings people together."

The six-day AIDS Conference in Vienna is expected to draw more than 20,000 scientists, policymakers and grassroots workers to seminars and workshops on scores of issues related to AIDS and HIV.

An organisation particularly close to Lennox's heart was Mothers To Mothers, which has more than 600 projects all across sub-Saharan Africa.

The organisation provides AIDS information and education to expectant mothers who are HIV positive.

When a woman comes to the project, "she is then mentored through a process by which she can have access to treatment and information," Lennox said.

"Her baby does not have to be born with the virus, which in itself is a preventative measure."

That mother can then go on to be educated and counselled and she can become a mentor-mother for other women who are going through that process.

It was a way of empowering and educating women and bringing about "transformative changes" in their lives, the singer said.

With all her charity work, Lennox insists she has not forgotten her music.

"I don't want to take these moments to discuss music too much, but I have been recording and I will have an album coming out at the end of the year," she said.

"I feel that I can do both. I feel that's very empowering. There's not a conflict of interests there," Lennox said.

AIDS has taken on massive proportions in modern times. It is estimated that over 15 million people are suffering from the disease and many more are harboring the dreaded Human Immunodeficiency Virus (HIV).
Advertisement
<< More People are Returning to China After Studies Abroad
The Internet can Swing Brand Perception in China: Report >>

Drug Interaction Checker Hearing Loss Calculator Color Blindness Calculator The Essence of Yoga Find a Doctor Post-Nasal Drip A-Z Drug Brands in India Blood - Sugar Chart Drug - Food Interactions Iron Intake Calculator
This site uses cookies to deliver our services.By using our site, you acknowledge that you have read and understand our Cookie Policy, Privacy Policy, and our Terms of Use  Ok, Got it. Close
×