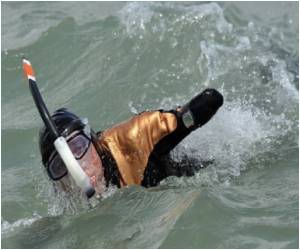 A Frenchman who lost all his limbs in an electrical accident successfully swam across the Channel on Saturday, a challenge he has been preparing for two years, his support team said.

Philippe Croizon, 42, set off from Folkestone in southern England just before 8:00 am (0600 GMT) and arrived on the French coast near Wissant just before 9:30 pm, propelled by his specially designed flipper-shaped prosthetic legs.


"I did it, it's crazy!" an overjoyed Croizon said on France Info radio, saying he hoped to become "a symbol of overcoming one's limits."


Steadying himself with the stumps of his arms, Croizon had kept up a constant speed in good weather and had been accompanied by dolphins for part of the crossing, his support team said.

Croizon swims at around three kilometres (two miles) per hour, slightly slower than the four or five kilometres per hour that an able-bodied athlete might achieve.

In 1994 the metalworker was hit by a 20,000 volt charge as he attempted to remove a television aerial from a house roof when an arc of current surged through him from a nearby powerline.

Doctors were forced to amputate his limbs. As he recovered in hospital he saw a television documentary about a Channel swimmer and an ambition was born.

The father of two said he wanted to complete the dare "for myself, my family and all my fellows in misfortune who have lost their taste for life".

Croizon trained for his feat for two years and last month completed a 12-hour swim between the ports of Noirmoutier and Pornic on France's Atlantic coast.

England's South Coast Threatened By Rising Sea Levels
A new study by researchers at the University of Southampton, UK, has found that sea levels have been rising across the south coast of England over the past century, substantially increasing
READ MORE

Amputee Runners Do Not Get an Unfair Advantage With Prosthetic Legs
A new study has confirmed that amputees who use running-specific prosthetic legs have no performance advantage over counterparts who use their biological legs.
READ MORE

Improved Prosthetic Legs to Prevent Amputees from Tripping on the Anvil
A study is being conducted by researchers at the University of Rhode Island to develop improved prosthetic legs that could prevent amputees from tripping.
READ MORE