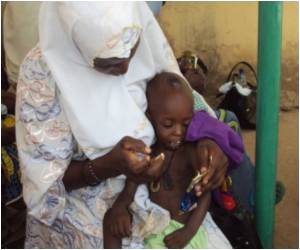 Boubacar Halirou is an aid worker who helps to identify children suffering from severe malnutrition in a remote village in Niger.

Halirou, who works for the local aid group Befen, is crisscrossing the region looking for emaciated youngsters as the impoverished west African desert nation faces a drought-driven food crisis.

In the remote village of Tiss in Niger's southeast, Halirou and his colleague Jarjussou identify two other kids with severe malnutrition, as well as six less serious cases in this community of squat clay dwellings, 10 kilometers (six miles) to the west of the large town of Zinder.


In Niger, one in four children will not reach the age of five. Dozens of mothers have gathered around Halirou so their youngsters can be examined.
Advertisement
"It's not always easy to be accepted. Some prefer traditional treatments to modern medicine," Halirou says.

Workers for Befen, which is financed by the European Union and the French aid group Alima, instruct mothers of malnourished children to take their offspring to the nearest health center.

Some villages in the region are 20 kilometers (12 miles) from the nearest center -- a round trip which must be done on foot.

"It's one of our biggest worries", says Halirou, calling the mothers "courageous".

To try to improve the situation, Befen has set up 17 care centers in the region, like one in Tirmini, which Halirou and Jarjussou reach in 4x4 trucks.

In Tirmini, Rabu, 18, her face framed with a veil, quietly recounts how her boy "started to get diarrhea and vomiting, before becoming malnourished."

Crying children are inspected one by one. The mothers wait anxiously, sitting inside and outside on mats.

After a consultation, the worst-off kids receive some "plumpy nut", a mixed paste of sugar, peanuts, milk powder and vitamins that keeps well in the high heat. The mothers pack a week's rations into their scarves.

"I think my child will regain his health," murmurs Rakia, 28, with another baby on her back. She was visiting for the first time and will make the journey again in a few days with other women from her village to avoid the walk through the bush alone.

Severe malnutrition brings the risk of other diseases, such as malaria, pneumonia or respiratory infections.

The most serious cases are sent to the intensive care center in the hospital in Mirriah district, 30 kilometers (18 miles) west of Zinder, which partners up with Befen.

The worst time of year is usually between June and September when food stocks fall short and before the new harvest, and it is the busiest time for the center, which can take in up to 200 children.

A doctor in the hospital said the children who came here have a 99 percent chance of survival.

On the way back to his Zinder office, Hamidine Illa, a doctor working for the local branch of Befen, dreams aloud. He would like to see children followed up "from conception and for 1,000 days," or up until about the age of two, the phase of life in which they are most vulnerable.

Source: AFP
Advertisement
<< India to Get Help From Australian NGO to Control Rabies
Toddlers Feel Happy Giving Treats To Others >>

Childhood Obesity Vs Malnutrition- A Spotlight On WHO Obesity Measurement For Kids
Special report on the WHO recommended obesity measurement tests for kids, to tackle malnutrition ......