Microdermabrasion using a coarse diamond-studded instrument appears to induce molecular changes in the skin of older adults that mimic the way skin is remodeled during the wound healing process, according to a report in the October issue of Archives of Dermatology, one of the JAMA/Archives journals.

"Microdermabrasion is a popular procedure for skin rejuvenation," the authors write as background information in the article. "It has been suggested that microdermabrasion can improve the appearance of wrinkles, atrophic acne scars, dyspigmentation and other signs of aging skin." The procedure involves buffing the skin using grains of diamond or another hard substance. In order to objectively change the appearance of wrinkled skin, such a procedure would have to induce the production of collagen, the major structural protein in the skin. Previous studies have shown that microdermabrasion using aluminum oxide may not always stimulate collagen production; whether more aggressive but still nonablative (not involving the destruction of skin tissue) methods could consistently do so is unknown.


Darius J. Karimipour, M.D., and colleagues at the University of Michigan, Ann Arbor, conducted a biochemical analysis of skin biopsy specimens before and four hours to 14 days after a microdermabrasion procedure. Forty adults age 50 to 83 years with sun-damaged skin on their arms volunteered to participate in the study. Each underwent microdermabrasion with a diamond-studded handpiece of either a coarse-grit or medium-grit abrasiveness.


When performed with the coarse-grit handpiece, microdermabrasion resulted in the increased production of a wide variety of compounds associated with wound healing and skin remodeling. This includes cytokeratin 16, a well-characterized response to injuries to the skin's outer layer; antimicrobial peptides that fight infection; matrix metalloproteinases that break down skin's structural proteins to allow for rebuilding; and both collagen precursors and other substances that form the pathway to its production.

These molecular changes were not seen in individuals who received microdermabrasion using the medium-grit handpiece, the authors note. All patients experienced a mild period of redness that typically lasted less than two hours.

"We demonstrate that aggressive nonablative microdermabrasion is an effective procedure to stimulate collagen production in human skin in vivo," they write. "The beneficial molecular responses, with minimal downtime, suggest that aggressive microdermabrasion may be a useful procedure to stimulate remodeling and to improve the appearance of aged human skin." 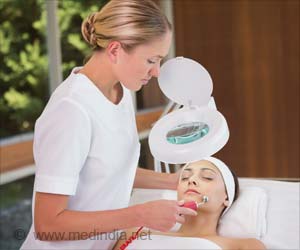 Microdermabrasion
Microdermabrasion is a minimally invasive technique to rejuvenate the skin and get a smooth complexion. This cosmetic treatment is a safe and painless method, without the use of chemicals.
READ MORE