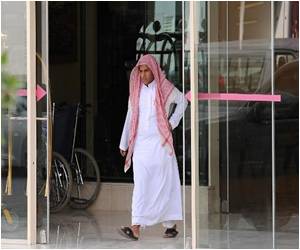 The Philippines announced Saturday that it was stepping up its defenses against the MERS virus, as there are large numbers of Filipino workers in the Middle East, and are seen as potential carriers.

"It is important that families, friends and members of their local communities fully understand all that must be known about the MERS coronavirus," Health Secretary Enrique Ona told a news conference.

A male Filipino nurse who had tested positive for the MERS (Middle East Respiratory Syndrome) virus in the United Arab Emirates returned to the Philippines on Tuesday, said the health department.


The man was later tracked down and quarantined, along with relatives who picked him up at Manila airport, as part of the increased monitoring procedures, but all of them were subsequently found to be free of the virus, Ona said.
Advertisement
Health authorities were continuing to track the rest of the 418 passengers on the same Etihad Airways flight, including 45 foreigners, so they could also be tested, he added.

The virus has a two-week incubation period, so all those passengers "are still deemed to be at risk", Ona said.

A total of 119 passengers had so far been contacted by the health department, and all 40 who were tested yielded negative results, Ona said.

While the World Health Organization has not declared a MERS epidemic, the Philippines has stepped up monitoring as it has a large number of workers in the Middle East, many of whom work in Saudi Arabia and the UAE which have both reported cases.

Ona said Filipinos travelling to and from their work in the region were being warned of the dangers of the virus and advised to seek immediate attention if they have any symptoms.

They are part of an army of up to 10 million Filipinos, about 10 percent of the population, who have left the country to escape widespread poverty and unemployment in the Philippines.

Lyndon Leesuy, the health department's programme manager for emerging diseases, said all air travellers who exhibit symptoms at Philippine airports would be required to undergo testing for the virus as part of the "active surveillance" status.

President Benigno Aquino has ordered the health department to "create a heightened awareness among our people and prevent the spread of this communicable disease", Ona said.

12 New Cases of MERS Reported in UAE
Around 12 new cases of infection by the MERS coronavirus has been confirmed by Health authorities .....