After Sneaking Sperm to Wife Palestinian Inmate Has Son 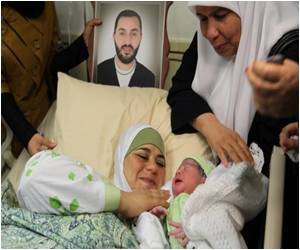 The product of a successful smuggling attempt was by a baby boy born by Caesarian section. A Palestinian prisoner managed to sneak out a sperm sample to his wife.

Baby Muhannad was born in a Nablus hospital to Dallal Ziben, a 32-year-old mother-of-two from a village in the northern West Bank, whose husband Ammar is currently serving 32 life sentences in an Israeli prison.

Artificial Insemination is a medical procedure usually used to treat infertility. In this procedure, sperm is placed into a female''s vagina, uterus or fallopian tubes by artificial means.
Advertisement

Palestinians are not permitted to receive conjugal visits, and although Dallal Ziben has not set eyes on her husband for 15 years, she says she fell pregnant after being artificially inseminated by sperm her 37-year-old husband managed to sneak out of Hadarim prison in central Israel.


"Praise be to Allah who has blessed us after a long absence with my husband in prison," Ziben told AFP shortly before going in for an elective Caesarean.

Pop icon Lady Gaga has revealed that she wants to have a baby.
Advertisement
"My husband and I, our two girls and the family have been waiting for this for such a long time," she said.

Ziben, who comes from Meithalun village between Nablus and Jenin, already had an 18-month-old daughter called Basha'er when her husband, who belongs to the Islamist Hamas movement, was arrested.

At the time, she was also five months pregnant with their second daughter, Bissan.

"I am very happy. This is the first genuine happiness in our house for more than 15 years," smiles Basha'er, now 16.

"When my mother told us she was going to get inseminated and give us a baby brother, we couldn't believe it," she said. "We have always wanted a brother and now the dream has come true."

After the expectant mother was wheeled into the operating theatre, a group of women from the family gathered outside to wait, breaking into celebratory ululation at the first sound of a baby crying.

Standing outside the operating theatre, the proud grandmother said her son-in-law had named the baby after one of his friends "who was a martyr."

Asked if the family objected to the way her daughter fell pregnant, she responded angrily.

"We are honourable people who are known for our good reputation and everyone supports us," she snapped.

For her son-in-law, who no longer has any immediate family living in the Palestinian territories, having a boy gives him a way of prolonging his line, she said, explaining that his mother, father and brother had died, and that a second brother was living overseas.

Details of how the sperm was smuggled out of the prison was kept a closely guarded secret, with the family refusing to give the slightest information.

A spokeswoman for the Israel Prisons Service said she was not aware of the pregnancy, and that security prisoners were not allowed conjugal visits, with the Palestinian Prisoners' Club confirming the same information.

"Visits by prisoners' wives are closely supervised by prison guards and there is no way a prisoner could get time alone with his wife," said a Nablus-based spokesman.

Dr Saalem Abu al-Kheizaran, head of the Razan fertility clinic in Nablus which carried out the insemination procedure, said the sperm had been subjected to a gender separation process to ensure the couple would have a son.

"We received a sample of sperm from the husband in a reliable and clinically secure way," he told AFP, without going into details.

"The couple wanted a baby boy, so we carried out a gender separation procedure. We tried the insemination process three times from the same sample, but the first two attempts failed," he said.

Abu al-Kheizaran said the right to have a baby was a universal human right.

"For us it is a humanitarian issue -- everyone has the right to be a parent. Prison must not stand in the way of this right," he told AFP.

Samer Samaro from the Nablus branch of the prisoners' ministry agrees.

"Having the child is a prisoner's right. We hope to someday reach an agreement with the Israeli side about this issue," he said.

Samaro said that even Israelis were allowed that right, including Yigal Amir, the right-wing extremist who gunned down prime minister Yitzhak Rabin in November 1995.

Amir, who was caught trying to smuggle sperm out of prison in 2006, was later given permission to artificially inseminate his wife, who gave birth to a son in 2007.

Says Samaro: "Even Rabin's murderer had a baby while he was in prison, so why should Palestinians be deprived of that right?"

Jennifer Aniston Considers Artificial Insemination for Having a Baby

Jennifer Aniston has said that she wouldn't rule anything out for becoming a mother, and would even consider artificial insemination for having a baby.
Advertisement
<< Defenses Rise Against Asian Mosquito Peril In Europe
Poll Reveals French Back Gay Marriage, Catholic Church Prays... >>