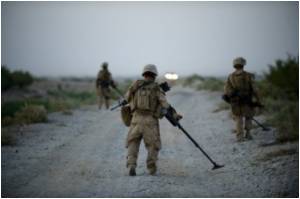 A new study has said that the Israeli assault on Gaza in December 2008 and January 2009 inflicted high levels of stress and insecurity on its Palestinian population. The study has been published by The Lancet on Friday.

The paper in the peer-reviewed British journal provides statistical backing for doctors who say the operation -- in addition to killing around 1,400 Palestinians and injuring thousands more -- left deep psychological scars.

Public health researchers led by Niveen Abu-Rmeileh of Birzeit University in the West Bank carried out a survey of around 3,000 Gazan households, numbering nearly 18,000 people, six months after the conflict.

Post Traumatic Stress Disorder (PTSD), is a mental condition triggered by a traumatic event. PTSD treatment includes pyschotherapy, behavior therapy and medications.
Advertisement
Thirty-nine percent of homes in the survey had been destroyed or damaged, and 72 percent of households relied on food aid. Of the 137 injuries, 101 had occurred since the start of the attack.

"The Israeli attack on the Gaza Strip has ... resulted in high levels of reported distress, human insecurity and social suffering," said an abstract of the paper.

"The siege on this region continues to be the main obstacle for improvement of the living conditions and quality of life of the population, and is a priority for action."

The December 27 2008 to January 18 2009 offensive was launched in response to rocket attacks on Israel from Hamas-controlled Gaza. Thirteen Israelis were also killed during the assault.

Asked to say what had been the biggest causes of suffering in Gaza, the respondents named, in order of magnitude, the Israeli siege of Gaza; the previous Israeli occupation of Gaza; the Israeli attack; and internal Palestinian fighting.

Funding for the research was provided by Medical Aid for Palestinians, a long-established British humanitarian group.

The study was presented at a research conference on Palestinian health, held at Birzeit University in March this year.

The Lancet published it on Friday as part of a large package of papers on medical problems in the occupied territories, including child malnutrition and cardiac problems linked to repeated childbirth.

Heart attack is the death of the heart muscle due to loss of blood supply. Heart disease is the leading cause of death in the United States. Other names for heart attack include acute myocardial infarction, coronary thrombosis, and coronary occlusion.
Advertisement
<< Research Promises Nano-sized Dental Film to Bring Decayed ...
Scientists Identify Cellular and Molecular Events That Rest... >>