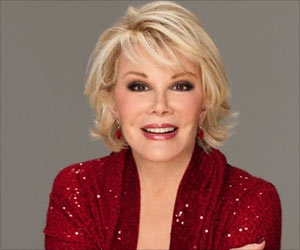 After the death of late comedienne Joan Rivers the New York City based clinic that treated him is losing its accreditation at the end of the month, it has been confirmed.

Centers for Medicare Services said in a statement that Yorkville Endoscopy no longer meets the conditions for a supplier of ambulatory surgical center services, CBS News reported.

The 'Fashion Police' host died on September 4, 2014 at the age of 81. The city's medical examiner found she died of brain damage due to lack of oxygen when she stopped breathing during an endoscopy days earlier.


The clinic had presented a plan to correct problems uncovered during an investigation after her death. However, the CMS said that Yorkville remained deficient in five areas, including surgical services, quality assessment, performance improvement, governing body and management; and environment.

Doctors Use Endoscopy to Place Transpyloric Stent
At Johns Hopkins, physicians say they are encouraged by early results in three patients of their ......

Mechanism That Causes Brain Damage Among Stroke Patients Discovered
A mechanism that is linked with brain damage caused after a person suffers from a stroke has been .....