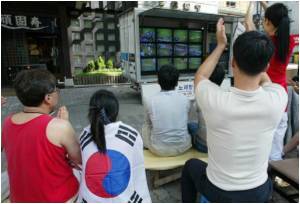 When separatist rebels in the remote Indian state of Manipur banned Hindi movies a decade ago, they had little idea it would trigger a cultural invasion from a country more than 2,000 miles away.

But when Bollywood was forced out, the Koreans moved in.

Hollywood star Julia Roberts is appalled by the kind of reports that the American people tend to read and watch on the TV.
Advertisement

In the markets of the state capital Imphal, shops are packed with DVDs of South Korean films and television soap operas, as well as CDs of Korean pop stars, with a particular focus on preening boy bands.


Hairdressing salons are covered with head shots of Korean celebrities and offer a wide range of spiky, "Korean-style" cuts which are hugely popular with young Manipuris of both sexes.

A campaigner has warned that TV shows such as Secret Diary Of A Call Girl, and the popularity of glamour models are legitimizing prostitution in the eyes of men, and endangering women.
Advertisement
Teenagers also trawl through Gambhir Market, a three-story warren of tiny boutiques, for skinny jeans and other clothing trends inspired by Korean television shows.

Even the language has made inroads, with Korean phrases like annyeong-haseyo (hello), kamsahamnida (thank you) and sarang-haeyo (I love you) peppering conversations in schoolyards and market-places.

"When we're back at boarding school, my friends and I practice our few phrases of Korean and often talk about what it would be like growing up in Korea," said female student Akshaya Longjam, 14.

"It just seems so much fun and everybody is good-looking; the girls are pretty and the boys are so cute," said Longjam, a dedicated fan of the Korean boy band Big Bang and its star singer G-Dragon.

At first glance, Manipur would seem the unlikeliest of takers for the so-called "Korean Wave" of pop culture that swept over China, Japan and much of Southeast Asia at the beginning of the last decade.

Tiny, landlocked and with a population of less than three million, Manipur borders Myanmar and is one of India's "Seven Sisters" -- seven northeastern states connected to the rest of India by a sliver of land that arches over Bangladesh.

In the 1970s, 80s and 90s, entertainment for Manipuris was largely supplied by India's dominant cultural force, Bollywood.

But then in 2000, a number of the multiple armed secessionist groups that have been active in Manipur since the 1960s ordered a ban on Hindi movies and Hindi satellite TV channels, in a professed bid to "protect" Manipuri culture.

Backed by threats to bomb recalcitrant cinemas and cable operators, the ban was extremely effective and remains in force today.

Desperate to fill the vacuum, cable operators experimented with whatever came to hand, including Arirang TV, a 24-hour, English-language network based in Seoul that began beaming in a diet of dramas and cultural features.

Korea's KBS World followed with its own stable of subtitled soap operas and, within a few months, Manipur was hooked.

"Watching Korean soaps and films takes me away from the realities of daily life in Manipur," said 19-year-old college student Soma Lhishram.

"We have a problem with water, electricity, roads... you name it. But everything looks so perfect in Korea. It's like a fantasy world."

The attraction is partly a cultural one. The Mongol roots of ethnic Manipuris mean their physical features are far closer to those of Koreans than other Indians.

The family-oriented soap operas resonate strongly in what is a socially conservative state, while teen romance dramas have a mass following among the young.

Lhishram, a part-time actress, is a particular fan of the high school drama "Boys Over Flowers" and one of its heartthrob stars, Lee Min-Hoo.

"It's a big dream of mine to travel to Korea and to work on a film there," she said during a break in shooting for a Manipuri language music video in the grounds of a local college.

Endless repeat viewings of all shows are also available thanks to thousands of English-subtitled DVDs -- many of them pirated -- which are smuggled in from Myanmar and retail in Imphal markets for less than a dollar.

Otojit Kshetrimayum, a research scholar in sociology at Delhi's Jawaharlal Nehru University, has written an academic paper on the phenomenal popularity of all things Korean in Manipur.

"The key factor is cultural proximity, both in appearance and values," Kshetrimayum said. "The themes and characters that the Korean movies and dramas depict strike a chord with both the younger and older generations in Manipur."

Beware of This Fake Nursing Institute in Manipur

A nursing academy in Manipur's Porampat town has turned out to be a fake institute which has reportedly cheated many students.
Advertisement
<< Europe Close to Giving the 'Viagra Condom' a Thumbs-Up
Subject Children With Head Injuries to CT Scans Only When N... >>

Sinopril (2mg) (Lacidipine) The Essence of Yoga Diaphragmatic Hernia Noscaphene (Noscapine) Calculate Ideal Weight for Infants A-Z Drug Brands in India Iron Intake Calculator Drug Side Effects Calculator Blood Pressure Calculator Find a Doctor
This site uses cookies to deliver our services. By using our site, you acknowledge that you have read and understand our Cookie Policy, Privacy Policy, and our Terms of Use