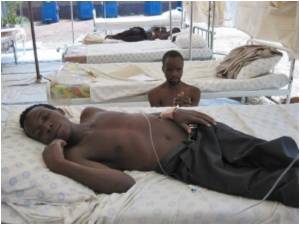 A new technique known as a genome-wide association (GWA) in a TB study has helped scientists identify a genetic variant which increases susceptibility to tuberculosis in African populations.

This is the first novel disease variant to be identified using this technique in Africans and demonstrates that such studies are viable in African populations, which have a high degree of genetic diversity.

So far, over 150 different studies have successfully identified genetic variants using this technique, but the vast majority - between 95-98 percent - have been only in people of European ancestry.


Researchers carried out a GWA study, and replicated their findings, using over 11,000 samples - 3,699 cases and 7,726 controls - from Ghana, The Gambia and Malawi as part of the African TB Genetics and the Consortium Wellcome Trust Case Control Consortium in search of genetic variants that increase susceptibility to TB.

A new TB vaccine could be ready by 2020.The current tools are not enough to control tuberculosis epidemic. The 2009 World Health Organization (WHO) Global Tuberculosis Control Report says that the incidence of TB per capita continues to go down since 2004
Advertisement
Fredrik Vannberg of University of Oxford said: "Our challenges here were two-fold. We were looking for human genetic variants affecting susceptibility to a pathogen which itself differs genetically from region-to-region, and we were searching for these variants in African populations, which are genetically very diverse."

The researchers identified a genetic variant on chromosome 18, located in a 'gene desert', a region composed mainly of so-called 'junk DNA', which suggested that the variant itself was not a gene, but was possibly involved in gene regulation.

Professor Adrian Hill explained: "Although we know of other genetic variants which increase susceptibility to TB, this is the first to have been identified using a genome-wide association study. This is very important as it demonstrates that we can do these studies - which have been so successful in European populations - in African populations, which suffer the greatest burden from infectious diseases."

Although African populations are genetically very complex, the researchers believe that increasing sample sizes for GWA studies in Africa will prove productive.

"This is a very important milestone in reducing the inequity that currently exists in the use of genome-wide approaches, including GWA studies, to understand the genetic basis of diseases that disproportionately affect African people," said Dr Charles Rotimi of the National Human Genome Research Institute.

"The approach and findings from this study for TB, and previous research from the MalariaGEN project, provide proof-of-principle that genome-wide approaches can yield fruitful results in African populations and sets a good precedent for the H3 Africa initiative."

The results of the study were published today in the journal Nature Genetics.

The re-emerging threat of tuberculosis (TB) may actually be countered with help from proteins from our bodies, scientists from Ohio are hoping.
Advertisement
<< Indian Nurses' Future Bleak in Australia After Government R...
Build-up of Hospital-Acquired Infections Prevented With Liq... >>

Indian Medical Journals Accident and Trauma Care Diaphragmatic Hernia Blood Pressure Calculator Pregnancy Confirmation Calculator Loram (2 mg) (Lorazepam) How to Reduce School Bag Weight - Simple Tips Vent Forte (Theophylline) Blood Donation - Recipients The Essence of Yoga
This site uses cookies to deliver our services. By using our site, you acknowledge that you have read and understand our Cookie Policy, Privacy Policy, and our Terms of Use