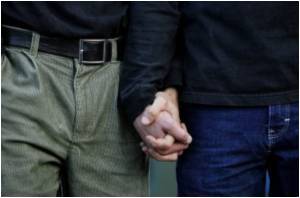 An AFP correspondent reported that five gay rights activists were arrested on Saturday at an unsanctioned gay pride protest in Russia's second city of Saint Petersburg.

Using similar tactics to a gay rights protest in Moscow last month, the protestors tried to outwit the security forces by only revealing the location of the demonstration at the last moment.

Around 30 activists staged the protest in the inner courtyard of the world famous Hermitage Museum -- the area where visitors queue for tickets -- brandishing slogans in favour of gay rights.


"Equality without compromise", "homophobia is an illness" and "homophobia -- the country's shame" were among the slogans.

When police appeared, five of the protestors were roughly arrested and taken to a police car, the AFP correspondent reported from the scene.
Advertisement
"It is clear that this is against the constitution," said leading Russian gay rights campaigner Nikolai Alexeyev. "But our main task was to prevent clashes and we were successful in this."

Minutes later, a group of anti-gay agitators armed with truncheons arrived on the vast Palace Square in front of the Hermitage and were also dispersed by the police.

Several of them were also arrested, the AFP correspondent saw. A police source said the agitators had been arrested for "hooliganism".

Such cat-and-mouse tactics last month allowed gay rights activists in Moscow to hold a brief protest that was the first peaceful demonstration after rallies over the last five years were marred by violence and arrests.

Gay rights activists in Russia have complained bitterly over the authorities' reluctance to allow them to protest, with Moscow's overtly homophobic mayor Yury Luzhkov describing gay pride parades as "satanic".