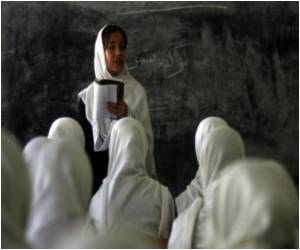 In Afghanistan girls' education is under treat as the girls are forced to drop out early. The report added that many donors are increasingly focusing on counter-insurgency projects rather than education ahead of Afghanistan's army and police taking control of security in 2014 from international troops.

The number of girls in education has risen from 5,000 in 2001 when the Taliban were ousted, to 2.4 million today, although many do not attend regularly, the study from groups including Oxfam said.

According to a study when it comes to academic performance, girls studying in single sex schools are better off than their co-ed counterparts.
Advertisement

Aid agencies also fear that aid levels will drop off sharply after 2014.

"We're seeing a rollback of some recent gains made in getting young, motivated Afghan girls into school. This is an appalling waste of talent and potential."

A British female aid worker, along with three Afghan fellow workers, has reportedly been kidnapped by suspected insurgents in Afghanistan.
Advertisement
Abdul Waheed Hamidy of Afghan NGO Coordination for Humanitarian Assistance added: "It's crucial that donor governments sustain their support for development, especially education, even once their troops leave the country."

The study was conducted last year and is based on interviews with over 1,600 girls, their parents and teachers in 17 of Afghanistan's 34 provinces.

It found that the main obstacles to education for Afghan girls were poverty, forced marriages and security problems. The Taliban has often targeted schools, although these attacks have tailed off in recent months.

It added that many of those who are in school receive a "poor education" due to issues including a lack of female teachers and basic equipment.

Only 30 percent of teachers are women and most work in urban areas, the report said. This is particularly problematic in conservative rural areas where men rarely teach girls.