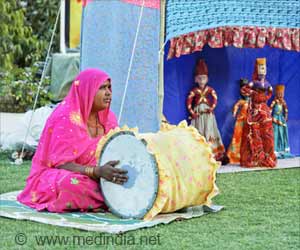 Acute encephalitis syndrome (AES) outbreak has become a serious public health problem in Uttar Pradesh, India. Therefore, creating awareness on causes, treatment, and prevention of Japanese Encephalitis (JE) through puppet shows and street plays can save millions of lives from this devastating disease.

The battle against Japanese Encephalitis (JE) in Uttar Pradesh will now be more colorful and interesting. The state Cultural Department will organize puppet shows, and street plays to raise awareness among people on the prevention of the killer virus that primarily affects children.

Advertisement
‘Puppet shows and street plays can be the easiest, and cheapest ways to create awareness on the causes, treatment, and prevention of Japanese Encephalitis (JE) to a larger group.’
Read More..

For the first time, the Cultural Department will join the Health Department in combating the virus in eastern Uttar Pradesh.


"We are working in close collaboration with the UNICEF that has identified the causes and conditions responsible for the spread of the disease. We are incorporating this information in the local dialect and will convey it to the people through puppet shows, and street plays. The language has been kept simple so that children can enjoy the puppet shows and also learn from it," said a Cultural Department official.
Advertisement
The Cultural Department will form teams that will tour 18 districts in eastern UP that are prone to JE. The initiative is a part of the 'Dastak' campaign launched in 11 districts to control the spread of JE.

Cases of JE usually make an appearance in the months between July and September, and the Yogi Adityanath government is making all possible efforts to check deaths due to the killer virus.

Encephalitis
Encephalitis is the inflammation of the brain, mostly caused by viruses. Though rare, it is a ......

Meningitis
Meninges are the three layers of membrane that cover the brain and infection of the cerebrospinal fl...