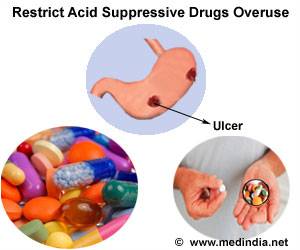 A bacterium, Helicobacter pylori, causing more than half of peptic ulcers worldwide and implicates in stomach cancer has coped for eons by turning the acidic environment of the human gut into a conducive milieu for it to thrive. The mystery of the phenomenon has been uncovered and study results have been released by a research team led by scientists at the Chinese University of Hong Kong.

Writing in a Journal of Biological Chemistry "Paper of the Week," the scientists say the information they have obtained about the pathogen's clever employment of acid neutralizers may inform those who are designing new drugs to blunt H. pylori's effects across the globe.

H. pylori are the only bacteria known to thrive in the human stomach. It remains unclear how the pathogens are transmitted, although researchers suspect they could be spread through contaminated food or water. The damage the bacteria do to the mucous coating of the gut allows stomach acid to eat away at the sensitive organ lining, causing ulcers.


Although more than half of the world's population has the infection, for reasons still not quite understood most never develop ulcers. In fact, existing antibiotics can cure 80 to 90 percent of ulcers caused by the pathogen. However, H. pylori over the years have become increasingly resistant to antibiotics. Some experts have attributed that resistance to the fact that doctors are quick to prescribe antibiotics to kill it even when patients show no symptoms.

Acid-suppressive drugs (ASDs) must be used by weighing the risks and benefits before administering them indiscriminately to those with gastric ulcer.
Advertisement
"There is a pressing need to develop new drugs and alternative strategies to fight against H. pylori infection before the prevalence of antibiotic resistance gets out of hand," says Ivan Fong, the lead author on the JBC paper and a graduate student at the Chinese University of Hong Kong whose research is focused on the biochemical makeup of protein complexes that assist in H. pylori's survival.

It's the pathogen's ability to persist within the acid bath in the human stomach that has made it such a successful, albeit harmful, vector, says Fong. "The key is its use of an enzyme called urease to neutralize gastric acid," he explains.

H. pylori produce urease to spur the breakdown of urea, a naturally occurring chemical in the body, so that urea can release ammonia and make the gut an environment in which the pathogens can thrive. But, unlike most other enzymes, urease doesn't start doing its job immediately after being produced by the bacterium; instead, two nickel ions have to be delivered to it, and then the enzyme can mature, so to speak, and thus allow H. pylori to begin their damaging work.

"As the survival of H. pylori depends on active urease, this is a life-or-death issue for the pathogen to ensure nickel ions are delivered to the urease," says Kam-Bo Wong, a professor who oversaw the project at the institution.

It's not entirely clear how H. pylori make sure that urease can mature and then neutralize the surrounding acid. But Wong's team focused on four proteins that they suspect are helpers: UreE, UreF, UreG and UreH.