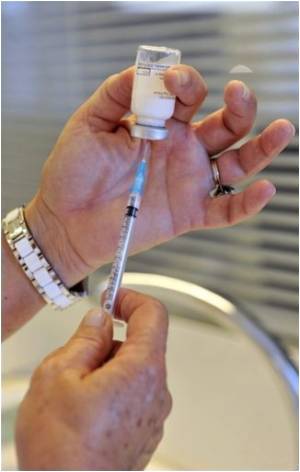 Around 2,784 volunteers in South Africa underwent a two-year-trial of the new and advanced tuberculosis vaccine and scientists hope that it will lead to a more effective inoculation against tuberculosis. South Africa is a prolific testing ground, with the world's second heaviest rate of TB after Swaziland, according to SATVI.

The infant is one of 2,784 pint-sized volunteers in a two-year-trial in South Africa's winelands that scientists hope will lead to a more effective inoculation against the lung disease, which kills one person every 20 seconds worldwide.

"There are 12 different vaccines in clinical trials, but this is the most advanced," said Michele Tameris who manages the trial at the South African Tuberculosis Vaccine Initiative (SATVI) site.


"This is the first time you're actually testing to see if a vaccine is effective in real life. Now we've got to show that it's actually protecting against TB in the humans."

Respiratory diseases affect any part of the respiratory system. Some of the lung diseases like chronic obstructive pulmonary disease can lead to respiratory failure.
Advertisement
The disease preys on weakened immune systems so it saw a surge here thanks to one of the world's highest HIV levels, which affects 5.7 million of the country's 48 million population.

And in the Worcester area, a mountainous grape-growing centre 120 kilometres (75 miles) northeast of the provincial capital Cape Town, one in 100 people develop TB every year.

Mothers readily brought their babies to the testing site at a local hospital for the one-off inoculation of either the vaccine or a placebo, with the final shots to be administered in late April.

Typical was Marlene Abrahams holding her tiny son Malico in the waiting area. "I want to know if he's healthy," she said.

The vaccine tested in Worcester, developed at Oxford University and known as MVA85A, is hailed as the most exciting advance since a 1921 shot created by two French doctors which is the sole TB vaccine in use today.

That vaccine, the BCG, is not necessarily effective against all strains of TB, for all age groups or for people with HIV.

"We do absolutely need a preventative vaccine if we want to get rid of tuberculosis," said Uli Fruth, a World Health Organisation scientist scientist working on TB inoculations. He gave a ball mark cost for developing a new vaccine at 150 to 250 million dollars.

"This is the most advanced of all the new TB vaccine candidates by far," he said of the trials at Worcester. "There's a lot of hope about it."

Globally, the disease stabilised in 2009, with 9.4 million new infections and around 1.7 million deaths. The World Health Organisation wants to halve deaths by 2015.

A new vaccine is seen as a key defence against what is mostly a developing world problem -- 85 percent of cases are in Asia and Africa.

But TB has also been on the march in wealthier countries. In London, cases have risen nearly 50 percent since 1999, according to British medical journal Lancet which dubbed the city western Europe's TB capital.

For Fruth, South Africa "is the best place in the world to test such a new vaccine," given what he called the country's huge tuberculosis burden and good research infrastructure.

"I guess that if we ever get a new TB vaccine we cannot do it without South Africa," he said.

The tiny Worcester volunteers will be followed up for two years to check if they develop the disease and the first results will only be known by mid-2012.

If it proves successful, the vaccine will go to Phase III clinical trials involving around 20,000 people to test its efficacy as a booster to the existing shot, the final step before drugs go to market.

Even in the best case, scientists doubt a new vaccine could be ready before 2016 to 2020.

"We say around 2018 if everything goes well," said Fruth.