Adolescent Group Sex On The Rise In US 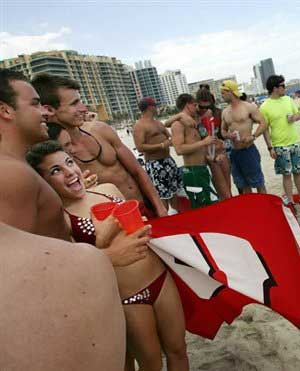 Adolescent group sex seems to be on the rise in US. One in 13 teenage girls, aged 14 to 20, reported having a group-sex experience.

Such young women were more likely to have been exposed to pornography and childhood sexual abuse than their peers, according to a new study led by a Boston University School of Public Health (BUSPH) researcher.


In a study published in the Journal of Urban Health: Bulletin of the New York Academy of Medicine, Emily Rothman, associate professor of community health sciences at BUSPH, and colleagues surveyed 328 females who had utilized a Boston-area community or school-based health clinic, to explore whether they had ever had sex with multiple partners  either consensual or forced. The authors call this sexual experience "multi-person sex," or MPS, in order to underscore that it refers to any group sex experience on a continuum from gang rape to sex parties.


Of the 7.3 percent who said they had group sex, more than half reported being pressured to engage in the group-sex situation. Forty-five percent reported a lack of condom use by a male participant during the most recent group-sex encounter. Participants with MPS experience also were more likely to report cigarette smoking, dating violence victimization, or ever being diagnosed with a sexually transmitted disease, the study found.

Multi-person sex "appeared to pose a potential risk to sexual and reproductive health, as only 55 percent of participants reported that condoms were used consistently during their most recent MPS," Rothman and colleagues said. "The majority of MPS-experienced girls in this sample reported being pressured, threatened, coerced, or forced to participate in MPS at least once."

More than half (54%) of those teens were younger than 16 when they had a group-sexexperience, which in Massachusetts would mean that their sexual partners were violating state law regarding the age of consent, the study found.

"Given the substantial proportion of girls who reported that their MPS was nonconsensual, additional research to understand more about the perpetrators, and how to prevent this particular form of sexual violence, is warranted," the authors said.

"Researchers and clinicians should pay particular attention to younger adolescents engaging in MPS. Given heightened concerns about potential consequences, information about how to address MPS with this subgroup is urgently needed."

The authors noted a "strong association between exposure to pornography, having been forced to do things that their sex partner saw in pornography, and MPS." Even if participation was voluntary, they said, "it is crucial to know how this early experience shapes their sexual behavior trajectory and affects their lifetime risk for negative sexual, reproductive, and other health risk behaviors."

The study authors are worried that enough attention has not been paid to the health implications of adolescent group sex. and so the research could prove a wakeup call, it is felt.

They cited a recent study of high-school girls in the Northeast that found that "sex parties" are currently an "accepted activity" of a certain subset of teens. Another study, in Sweden, found that 7 percent of female high school seniors who were sexually active reported having group sex.

"Group sex among youth is an important public health topic that has received very little attention to date," Rothman said. "It's time for parents, pediatricians, federal agencies, and community-based organizations to sit up, pay attention, and take notice: group sex is happening, and we need to be prepared to address it."