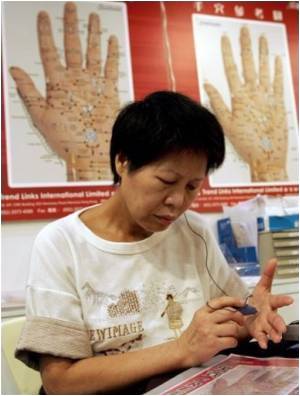 A Vietnamese acupuncturist is making headlines by claiming that she can detect a man's virginity based on a small dot on the ear-a test that has helped in freeing three convicted rapists from prison.

Traditional medicine practitioner Pham Thi Hong started lobbying for the men's release, and even went on to plead their case all the way to the president.

She believes that all three men are virgins and therefore could not be guilty of rape.


"They all had small red spots on the back of their ears. The spots should have disappeared if they had had sex. My many years of experience told me that these men did not have sex before," CBS News quoted Hong, 54, as saying.

Hong was so determined to have the case reopened that she even threatened to light herself on fire.

This led prosecutors to re-examine the case and the convictions were eventually suspended due to flaws by initial investigators.

"Thanks to her efforts, investigators revisited the case which otherwise could have been buried," said Nong Thi Hong Ha, a lawyer for one of the freed men.

Hong said she was first taught how to determine if a man has ever had sex by feeling their pulse.

She later developed the ear-spot method on her own.

"I never thought that one day I would use this method to help the three men prove their innocence," said Hong.

Diaphragmatic Hernia Blood - Sugar Chart Sanatogen Daily Calorie Requirements Drug Interaction Checker The Essence of Yoga Find a Doctor Drug Side Effects Calculator Pregnancy Confirmation Calculator Iron Intake Calculator
This site uses cookies to deliver our services. By using our site, you acknowledge that you have read and understand our Cookie Policy, Privacy Policy, and our Terms of Use