Action Against Global Warming Cuts Down Health Costs for EU 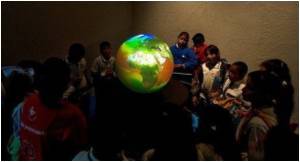 The cuts aim at heat-trapping gases such as carbon dioxide (CO2) but would also improve air quality as a side effect, according to a study commissioned by the Brussels-based Health Care Without Harm and the Health and Environment Alliance.

It would reduce smog and other fossil-fuel triggers for cardiac and respiratory disease, the report said.


The EU has vowed to unilaterally cut its output of greenhouse gases by 20 percent by 2020 compared with 1990 levels, and offered to deepen this to 30 percent if another big industrialised emitter follows suit.

A University of Calgary climate scientist has said that there may be better ways to engineer the planet's climate to prevent dangerous global warming than mimicking volcanoes.
Advertisement
No-one has taken up the offer, and environmentalists within the EU are now pressing the 27-nation bloc to go to 30 percent by itself.

The report said a 30-percent cut would yield 10 and 30 billion euros (between 12.6 and 37.8 billion dollars) in annual gains by 2020, either in lower medical bills or ill-health avoided.

At the top end of the scale, this would meet nearly two-thirds of the cost, as estimated by the European Commission, of reaching the 30-percent target.

Benefits would include three million fewer lost working days annually for those with respiratory or cardiac diseases, 3,776 fewer hospital admissions and 1.2 million fewer days of use of respiratory medication, the report said.

The calculations are based on official EU figures for three kinds of pollutants -- fine particles, nitrogen oxides and sulphur dioxide -- and data for mortality, sickness and absenteeism.