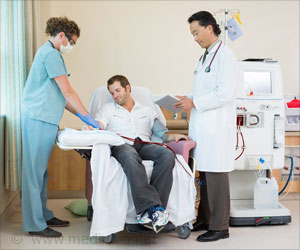 Accountable Care Organizations (ACOs) are associated with modest cost savings for the care of Medicare beneficiaries undergoing long-term dialysis. The findings come from an analysis that will appear in an upcoming issue of CJASN.

An ACO is a group of clinicians and hospitals who come together voluntarily to give coordinated high-quality care to a designated group of patients, with the goal of improving care while reducing its cost. To examine whether ACOs save money for the care of patients with kidney failure undergoing dialysis--a group whose care is especially expensive--a team led by Vahakn B. Shahinian, MD, MS and Shivani Bakre, BBA (University of Michigan) analyzed national Medicare claims data from a 20% random sample of beneficiaries receiving dialysis before 2017.

Advertisement
‘The percent of long-term dialysis beneficiaries assigned to an Account Care Organization increased from 6% to 23% from 2012 to 2016.’

Spending on these beneficiaries was $143 less per quarter (or $572 per year) than spending for beneficiaries not assigned to an ACO. More detailed analyses revealed that savings occurred only for beneficiaries in ACOs who regularly received care from primary care physicians.


"There are newer programs directed specifically at this group of patients, including the End-Stage Renal Disease Seamless Care Organization, or ESCO, program started in October 2015 and the upcoming Advancing American Kidney Health Initiative," said Dr. Shahinian. "Our study looked at an older and more general program, the Medicare Shared Savings Program ACOs, which started in 2012 and were directed to the Medicare population in general.
Advertisement
In future work, it will be of interest to see if the newer, more kidney disease-specific programs will do even better than the ACO programs were able to achieve."

An accompanying editorial re-iterates this thought, noting that "one reason why savings among ACO beneficiaries receiving long-term dialysis are small--or nonexistent--may be because many ACOs do not focus specifically on patients with end-stage kidney disease."

New Treatment Option for Common Complication of Dialysis Discovered
Scientists have identified new treatment for a common complication of hemodialysis....

Dialysis Patients are at Greater Risk of COVID-19 Infection
Researchers investigated an outbreak of COVID-19 in a 200-bed Maryland nursing home with an ......

Healthcare Insurance-Common Terms and Definitions
The key to understanding health Insurance is to become an informed consumer by knowing its definitio...